The ostrich is the largest bird in the world and falls under the Ratite group of flightless birds that don’t have a keel to their breastbone. The Ostrich stands tall on thick bare legs. They have long, curving necks that are white in colour. The male has a deep black feather colour and has white feathers as well. The female has a dusty brown colour and is smaller than the male. They stand at a height of 2.6m and weighs 135 kg, and cannot fly, but are very fast runners. 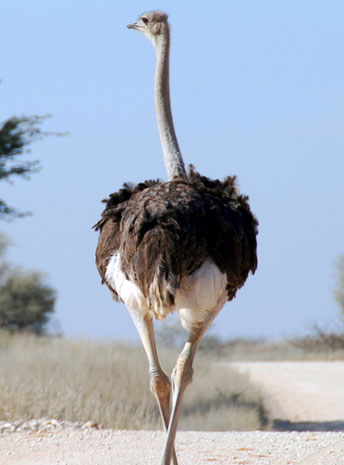 The Ostrich has a diet of grass, succulents, berries, seeds and also insects. An unusual habit that the Ostrich has, is it swallows pebbles that helps it grind down the food they consumed.

Ostriches will mate for life and make turns nesting. Territorial males will often compete for flocks of 4—5 hens. Ostrich mating dances are often a strange and funny occurrence. They run around, waving their wings around. Ostriches will form communal nests that can have up to 60 eggs. The average weight of an ostrich egg is about 1.8 kg. The male will lay on the eggs during the night because of their black feathers and the female will nest on the eggs during the day because of their light brown feather colour.

The Ostrich is a rather common and popular bird that calls western, eastern and southern Africa. They are often found in protective reserves in the eastern areas. Ostriches prefer areas that are dry and very open so they can run without many obstacles.