The Marabou Stork is a rather unusual and ugly looking stork. The Marabou Stork has hollow leg bones as well as hollow toe bones, which allow them to fly much easier, as their bodies are heavy. They have duo tone body, with the tops being a grey colour and the under sides white in colour. The head and necks are pink in colour with spots covering the head. They have a large conical shaped beak. Both the male and female are similar in colour and appearance, with the male being slightly taller and larger than the females. The males can be identified by the iconic baggy sack hanging from their throat. 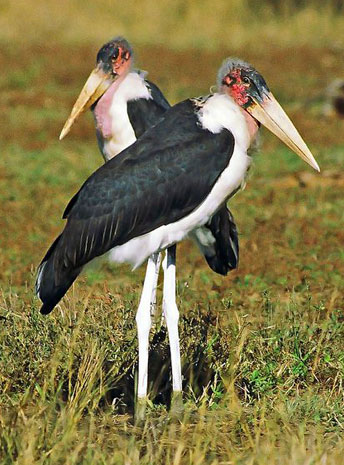 The Marabou Stork feeds mainly on carrion and scraps. Unfortunately, the Marabou Stork isn’t seen in good eyes because of their unusual diet, but they are very important in maintaining the ecosystem as they remove rotting flesh and carcasses from an area that prevents the spread of harmful bacteria. These birds feed on anything from Termites to flamingos and small birds and mammals. These birds also feed on carcasses along with hyenas and vultures.

The Marabou Stork makes their large nests in the trees and prefer to live close to human settlements. They will reach sexual maturity at 4 years and mate for life. Their nests are large platforms made out of sticks with a cup that is lined with leaves  and sticks. 2 – 3 eggs are laid during the dry season with both sexes aiding in the incubation.

The Marabou Stork will be attracted grass fires. They stand a distance ahead of the fire and catch the fleeing animals. Large groups of these birds are found in the areas of migrating animals. The Marabou Stork defecates on their legs, which may seem strange, but it helps them to regulate their temperature. These birds are rather lazy animals and spend most of their day standing motionless.

Marabou Storks  prefer open, semi-arid areas, that are near water. They live mostly in South Africa.