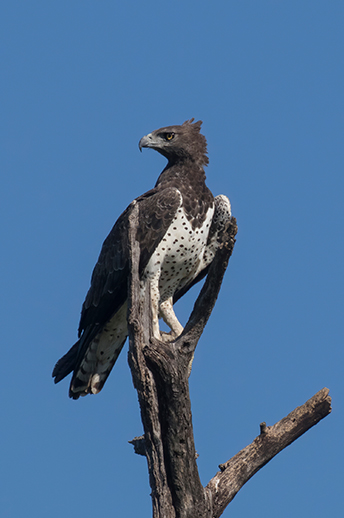 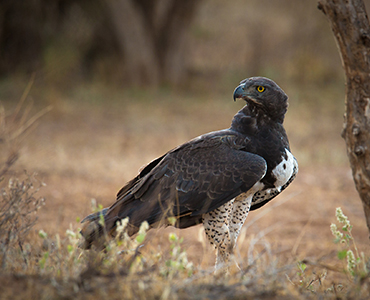 The Diet of the Martial Eagle consists mainly of birds. Guinea fowl, bustards, francolins and poultry all make up the main diet of the Martial Eagle. Its diet slightly differs depending on the area it can be found and their diet can consist of mostly mammal like hyrax, antelopes, monkeys and sometimes even goats and lambs. The Martial Eagle is a truly fearsome predator and an intimidating presence.

The Martial Eagle builds its nests high up in a tree and often in the largest tree that can be found in the area. The nest must be high enough for the eagle to make a clear sweep off the nest. The pairs usually have more than one nest which they alternate between every few years. Their nests are large structures that are basin shaped and are much wider than they are deep. Depending on the season they are in and the area they are their breeding cycle may change. Unlike many other birds, the Martial Eagle female doesn’t get fed by the male while she incubates and instead leaves the nest to find food.

The eggs are incubated for 45 days, after which the young are very weak and slowly get stronger for 20 days. By 70 days old, the chicks are completely covered in feathers. The young are fed by the parents until age of 60 days before they start to tear up prey on their own. At 100 days old, the birds are strong enough to fly.

The Martial Eagle prefers thornbush and savannah areas all throughout South Africa. They soar for hours using only the updrafts and will attack prey by doing a steep, highspeed swoop. The Martial Eagle hunts in open areas where there is lots of space to move and seldom hunts while perched. A Pair of Martial Eagles can have a home range of over 60km2 . They Can often hunt for several days in a single area before moving to a new area. The Martial Eagle is also a rather shy eagle and usually keeps away from man. Though there are stories of Martial Eagles preying on domestic animals, there are very few confirmed cases.

Martial Eagles prefer savannah and desert areas as well as thornbush areas in Africa. It can also be encountered in much more open areas and semi desert country  but they don’t frequent forested areas.