The Pearl Spotted Owl is one of Southern Africa’s Smallest Owls. The Pearl Spotted Owl is an earless owl, which means it doesn’t have the tufts on its head. The Owl is coloured in a beautiful cinnamon brown colour with white discs around its face. Their Upper parts are brown in colour with white spots while their lower parts are an off white with brown streaks. They have beautiful bright yellow eyes. 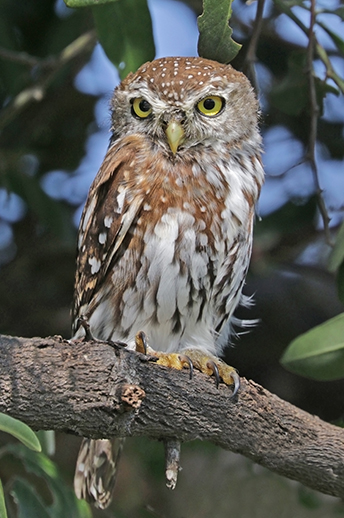 Because of the small size of the Pearl Spotted Owl, it feeds on plenty of small prey items like bats, rodents, insects and arthropods.  The Owl is able to catch a Laughing Dove, that weighs up to 200g which is very impressive since the owl only weighs 80g in total. Pearl Spotted Owls will also snatch up any reptiles when the opportunity arises.

These little owls breed from August to November and incubate their 2-4 eggs on their nest, that is located in the hole of a tree. The Incubation period lasts about 29 days and the young are fledged at the age of 32 days.

These birds are common daylight hunters and can often be heard long before you spot one. They usually move in pairs or on their own. This owl has a pair of mock eyes at the back of its head to help defend itself against ambush predators.

The Pearl Spotted Owl can be found in open woodland areas as well as open savannah areas and are spread widely across Southern Africa.