The African Giant Rat has a body covered in long thick grey hair with under fur slightly whiter. It has a long white tipped tail and has long dark whiskers. The adult measures around 750mm from the tip of tail to the nose with the tail measuring in at 410mm. Both the males and females have a dark ring around their eyes. The male weighs in at 1.3kg and the female weighs 1.2kg.

The African Giant rat like other rats are omnivorous and eat a wide range of food items. Its diet mostly consists of fruit insects and vegetables. It can carry food in specialized pouches in its cheek which it uses to carry food to its nest.

African Giant Rats mostly breed during the summer months. After a gestation period of about of around 27 days, 2 – 4 pups are born per litter. After 6 weeks, the young leave the nest to forage and completely leave the nest after 3 months of age.

African Giant Rats are very solitary animals outside of mating time. The are strictly nocturnal animals that are adapted to forest scrub and forests with and average rainfall of 800mm per year.

Here is a huge number of species from the rodent genus, of which the Cricetomys ansorgei occurs in South Africa. These rodents can only be found in the Northern Cape and on rare occasions in the Kruger National Park, during Kruger Park Safaris, and the surrounding areas.

These Giant African Pouched Rats are trained to sniff out landmines and are far less expensive to keep. They are trained quicker and more efficient than dogs. These rats can become an infestation in areas where a lot of rubbish is thrown like landfills, settlements and near water sources. 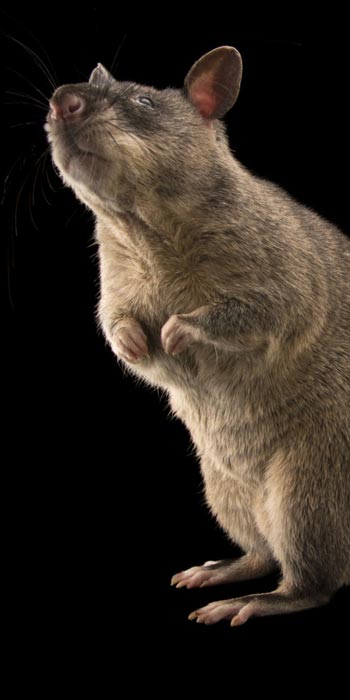