Like all other ‘free-tailed ‘bats, the base of their tail isn’t covered by the Interfemoral membrane (Leg Flap) this means that the tail lies atop of the leg flaps. All other members of the ‘Free-tailed’ bat family have a wrinkled mouth and cauliflower like ears. Like all in its genus, the ‘free-tailed’ bat has very elongated and narrow wings. This bat is generally much smaller than other bats, with its head-to-tail length 106mm and weighs about 10 grams. The Ansorge’s Free Tailed Bat is distinguished from other bats by the dark umber brown top colour, almost black head and a lighter shade of black for the lower body.

The diet of an Ansorge’s Free Tailed Bat is very limited. It only eats insects that it can catch in open air spaces because it isn’t a very agile flyer.

There is no information about the breeding habits, cycles or amount of young produced of an Ansorge’s Free Tailed Bat.

As before mentioned, the Ansorge’s Free Tailed Bat has narrow, elongated wings. This rate between the weight of the bat and its total wing surface gives the bat a high wing loading surface for its specific group of bats. This has an unfortunate downside in the fact that the bat isn’t as an adapt of a flyer as its cousins, the Vesper and Horseshoe bats. These bats also need to fly faster to stay in the air. The high speed and low agility mean that the bat needs to hunt in large open areas like above tree tops. The echolocation of an Ansorge’s Free Tailed Bat is much lower than most bats which means it can detect insects at a much greater distance than other bats but the resolutions they ‘see’ are much lower. Since bats are nocturnal and late afternoon animals, it is difficult to spot them, a good way to stand a chance at seeing them is to take part in an afternoon Kruger Park Safari.

Free-tailed bats age gregarious species, which is a good thing since bat colonies can be more than a hundred strong. At day time they seek out crevices where they can take shelter from the sun, heat and predators. A crevice wile be sufficient if there is at least a 2-meter drop. Since these bats need speed to stay in the air, they use this drop to build speed when they exit the cave of crevice. This is a rare species that is known from a hand full of specimens found in Kwazulu-Natal. It is slightly more known from areas throughout Africa going all the way to Ethiopia and Sudan. 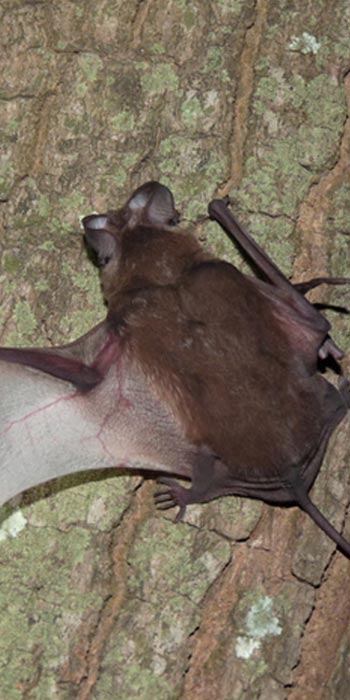