The African Civet is a meerkat- raccoon looking animal that has short grey fur with black spots along its body in an ordered pattern. The Civet’s legs and 2/3 of their tails are black, with the other 1/3 being the base coat and covered in black stripes. The Civet’s face is completely grey and the areas around the eyes and nose are solid black. The necks of the civet have stripes going down to their bodies, usually being one white stripe sandwiched between two black stripes. Civets have a dark colour mane about 3 – 10 cm long that runs down to its back. The Civet has a body length of about 680 – 890 mm long, a tail length of about445 – 630mm and have a weight averaging about 14kg. There are 5 digits per paw and each paw has non retractable claws. The fur colour can differ a bit having yellowish spots, stripes and bands. This colour scheme makes the Civet a tricky animal to see during Kruger day safaris.

The civet is an omnivore, which means it eats plants as well as meat. Its diet can contain anything from eggs, reptiles and crabs to birds, carrion and rodents. This nocturnal feeder is mostly active about 2 hours after dark, hunting for things to eat.

The female civet is sexually active at about 1 year old and are polyoestrous, meaning they can have 2 – 3 litters a year, each litter usually containing 2 to 4 young. Unlike most carnivores, civet cubs are born more advanced. The Civet young are born with a full coat, though darker and less defined markings than adults, they can crawl at birth, can walk at 5 days old and leave the nest after about 18 days. Civet cubs begin to show signs of playing behaviour at 2 weeks old. For the first weeks, the cubs are dependant of their mother’s milk and only start catching their own food by the second month.

Little is known about the civet because it is a nocturnal animal that lives a solitary life. Civets only come together to mate. They mark their territory by secreting a very strong, musky odor that can last for up to 3 months. Though Civets are solitary animals, they do communicate in various olfactory, visual and auditory means. Civets are naturally docile animals and will not attack without being threatened. Scents can be used to convey various messages. Since the Civet is a nocturnal animal, people on Kruger Tours find it difficult to find one.

Civets live in areas that provide enough cover and safety during the day like forests and county sides. They aren’t found in very hot and dry areas, instead they seem to make their nests close to permanent water sources. It makes permanent burrows/nests only when its is time to bear or protect their young. Though Civets are completely terrestrial animals, they can still take to water and swim quite well.

Southern and Central Africa’s forests and savannahs are areas where you can find the civets. The civets aren’t found in dry and arid areas but rather in places where water systems merge into arid areas of Niger, Mali and Chad.

The Civet is prey to most predators larger than itself, including: lions, leopards, hyena, wild dogs, snakes and crocodiles.

The civet has 5 digits per paw but the spoor doesn’t show the 5th digit because it is positioned farther back than the others. The claws of the civet are clearly shown in the spoor. 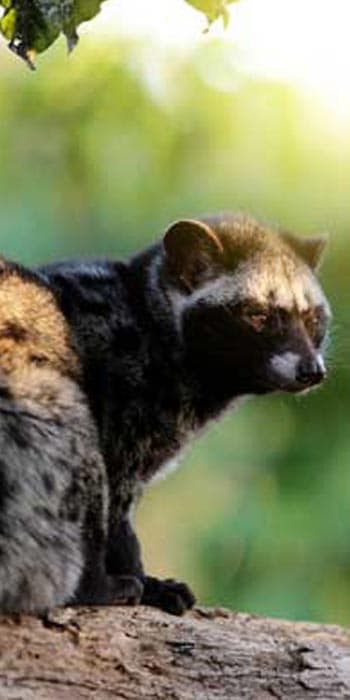 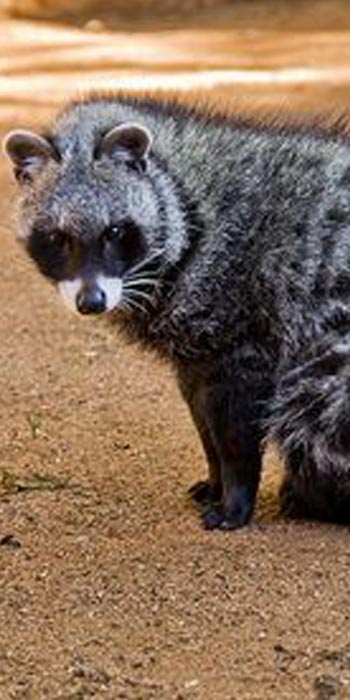