The Pole Cat is a close relative of the African Weasel but is larger in size and has a longer coat. The Polecat has a head to tail length of 550mm, with the tail making up 200mm of that, and weighs up to a kilogram. It has a primarily black coat with white stripes running down their sides. They have the iconic 3 white dots on its face with white rimmed ears.

African Polecats’ diet consists mainly of small prey like scorpion, snakes, rodents, lizards, spiders and insects. The polecat uses its nose to sniff out and dig up their food.

Breeding season lasts through spring into early summer. Polecats have a gestation period of 36 days, where a litter of three are born. The teeth of the young start to show after 33 days and their eyes open after 40 days. Young reach adulthood at the age of 20 weeks and can hunt prey like rats as early as 9 weeks. These animals are solitary animals unless it is mating season. Females stay with that year’s young until they are old enough to leave.

Polecats inhabit a large variety of habitats except for dense, evergreen forests. There animals are a rather common animal seen all throughout South Africa.

The polecat has a unique ability to create a very potent and fowl odour when threatened. The smell is so powerful that it has been observed that a Polecat faced 3 lions and stood its ground. The lions eventually gave up the effort because of the smell. 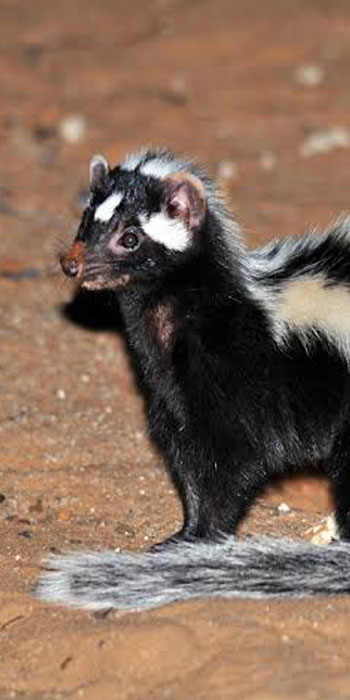