This tiny antelope stands at 350mm at the shoulders, with ewes being slightly larger than the rams, weighing up to 5.4kg. Their coats are a light-brown in colour that fades slightly at the sides. The underparts of this antelope are all white. This antelope, out of all other antelope in Africa, has the largest orbital scent gland with relative size to their bodies.

They have a gestation period of about 6 months after which a single fawn is born. The Suni usually give birth during the summer. The newborn fawns are hidden in the thick bush and the mothers return to the nest to suckle their young and groom them. The births take part from November to March. The new borns are slightly darker in colour than the adults.

The Suni is a rather rare antelope that is also very shy. These little antelope are nocturnal and actively look for food at night. They find a protected and shaded area to sleep during the day and because of their coat colour, they have great camouflage which allows them to easily hide from predators. When sensing a threat, the Suni will freeze in place until the threat is up close and then leaps around and vanishes in the undergrowth. The Rams have a territory of 3 hectares that they defend, marking boundaries using scent glands.

Suni prefer forests with dense understory with shrub and low ground coverage. Their preyed upon heavily by pythons and eagles. 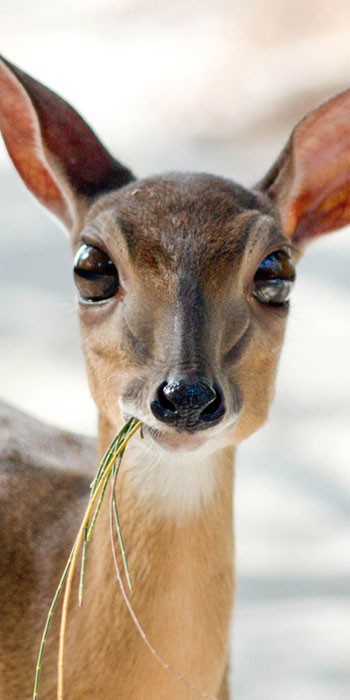