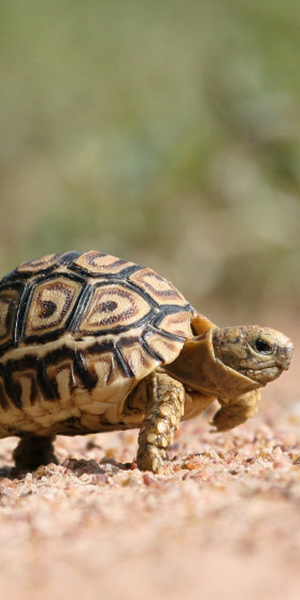 The Leopard Tortoise is a rather large tortoise that can exceed lengths of 700mm and can weigh up to 40kg. It has a domed carapace instead of a hinged one, its scutes are only faintly raised. Its nuchal is absent and its beak sometimes appears hooked. Its beak is often unicuspid and serrated. It gets its name from the colouration found on its shell. It has a light brown base colour with darker brown and black markings that cover the shell.

The Leopard Tortoise has a mainly plant based diet, feeding on grasses, succulents and annuals. Leopard Tortoises are also often found gnawing on bones and ingest hyena faeces.

The Leopard Tortoise can frequently be found in the savannahs of Africa from the Southern Cape all the way to Sudan. They were mainly absent from the South Western Cape and the Transkei, the adjacent provinces of KwaZulu-Natal and Lesotho introduced them in some areas.

The female Leopard Tortoise lays between 6 – 15 hard shelled eggs  in a hole, which she then covers with soft soil that she tamps down with her shell. The hatchlings weigh between 23 – 50g and measure up to 45mm in length.