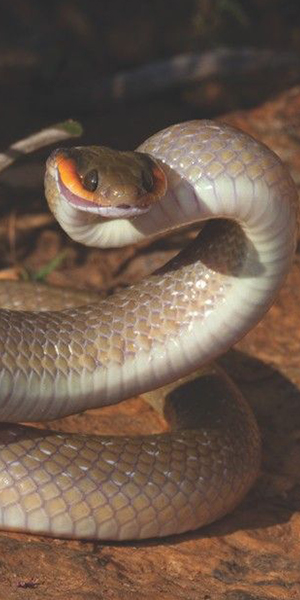 The Red Lipped Snake, known as the “Rooi Lippie”, is a small snake that has an obvious and broad head and a short tail. They have about 19 rows of scales on their mid section that are dull in colour while the rest of the body is a grey-brown colour. The underside of the Red Lipped Snake is a pale white colour. The snake gets its name from the bright orange-red markings on either side of its face, just above the mouth.

The Red Lipped Snake is a nocturnal hunter that mainly feeds on amphibians and other small reptiles.

The Red Lipped Snake can be encountered commonly in the eastern half of South Africa, from South Western Cape to Zimbabwe and to the Tropical regions of Africa.

The Female Red Lipped Snake lays 6 -19 eggs in and among leaves early in the summer and after 61 – 64 days the young will hatch.

The Red Lipped Snake is non toxic and no negative symptoms have been found in bite wounds.