Bushpigs vary in size, from very small to man sized. They have a reddish-brown coat with white/silver stripes that can cover its face. It has a bushy mane with longer hair than the rest of the coat that has an often silvery colour. The Bush Pig also has large pointy ears and a thin whip like tail.

Not much is known about the breeding habits of bushpigs other than the fact that it gives birth to an average of 6 young between November and January.

Bushpigs are solitary animals that scavenge for food in various places, from camp sites to rubbish dumps. They try to avoid confrontation but will attack if threatened.

Bushpigs can be found in a variety of places from farmlands to forests to savannahs. They are famous for menacing farmlands and destroying crops. possible but rare to spot them in the Kruger Park During a Kruger Safari.

Bushpigs make use of the same routes towards feeding grounds which make a clearly marked path. 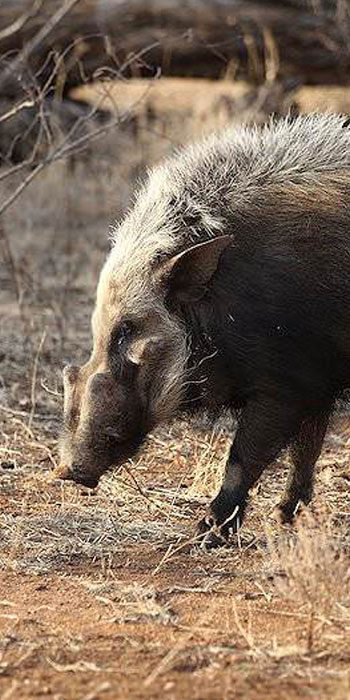