The Banded mongoose has a greyish-brown fur colour with a very distinct series of light and dark stripes that run vertically. The undersides of a Banded Mongoose are lighter than the rest of the fur and it has dark fur on its legs. The males and females weigh the same at around 1.5kg with the exception that the males weigh more when they are immature. The Banded Mongoose has a triangular shaped head with a pointy face and broad flat ears. They have coarse fur with thick bushy tails.

The average size of a Banded Mongoose litter is about 2.5 young. After a gestation of about 9 weeks all litters are born, within a pack. Breeding is usually restrained to the rainy season and a single female can average 1.5 litters per year. When all young are born, al females take part in collective nursing. When pups are born, they are blind and are slightly covered in hair and only after 10 days do their eyes open.

Banded Mongoose live in a tight unison with each other and packs can average between 8 and 40 individuals. This number consists mainly of the adults with their young. Mongoose packs are the largest group sizes for any carnivore on earth. Both the males and females can transfer to new packs which can insure the gene flow.

The layout of these high gregarious carnivores in South Africa is mostly limited to Woodland savannas to the east, ranging from the woods of Mpumalanga to the coastal area of KwaZulu-Natal, including Northern and northwestern Provinces, Mozambique and Swaziland. You will be able to spot these critters in/ around the camps as well as during Kruger Day Safaris.

The Banded Mongoose has 5 toes on both front and hind feet. The 1st claw on the front feet my show when the animal is moving slowly but will be unseen when it runs or trots.

The banded mongoose can be very aggressive when threatened and backed in to a corner and there have been cases where a Banded Mongoose has stood up to a lion. The Banded Mongoose jumped and scratched the face of the lion out of self-defense. 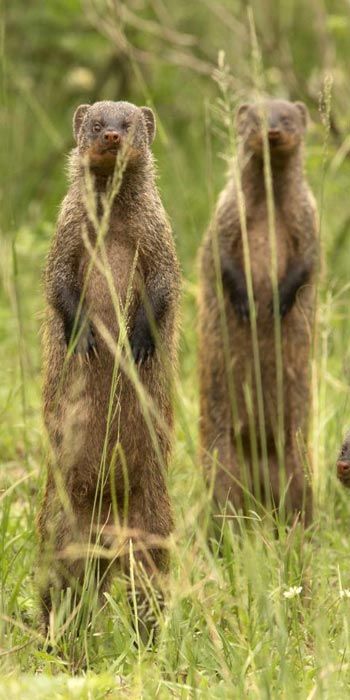 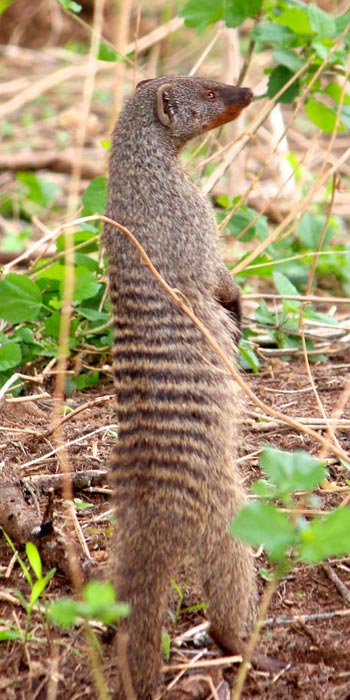