The Banana Bat is a very small bat hat sizes up to about 77mm and weighs about 4 grams. Banana Bats always have different shades of brown fur on their backs with the fur on their undersides always being a lighter shade. The hairs of the bat are all black at the base. Another bat species has similar appearances to the Banana Bat is the Vesper Bat. The only thing that distinguishes the two is the Banana Bat has distinct dental features.

The Banana Bat, because of its small size, has a diet restricted to any soft body insects such as mosquitoes, gnats, larvae and caterpillars.

Like most bats, not much is known about their breeding habits but what is known is the female gives birth during the summer months where two pups are born.

Some of the bats in this species are the first to fly at dusk and can be seen flying, darting and chasing after insects in open spaces between field and trees. Small groups of Banana Bats can easily be found during the day, under rolled up leaves of banana plants, under thatched roofs, between bunches of hanging fruit and dense debris.

Banana bats are found in well drained areas like woods and between a lot of trees from the Eastern Cape, Kwazulu-Natal, Northern Province, Mpumalanga, neighbour countries and all the way as far as the Ivory Coast. You could encounter a colony or a small group of bats during a Kruger National park Safari.

Banana Bats don’t eat bananas ironically, they get their name from the areas where you can almost always find them, between the leaves of banana trees. The are also found roosting in Strelizia plants and thatched roofs. 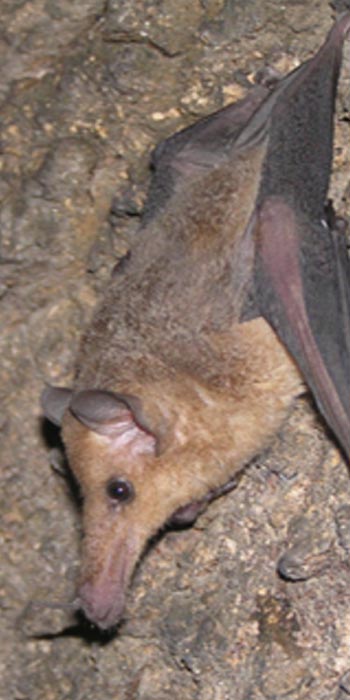