The Bateleur Eagle has a primarily black body with a bright red face and yellow beak. The back and tail feathers of the bird are a rusty brown colour, while the wings of the Bateleur alternate between light and dark feathers from the shoulders to the tips. The female, unlike most animals, is larger than the male. The plumage of a 1-year old bateleur is dominantly and uniformly dark brown and as they age, they start growing into their adult feathers, usually from age 3. Immature Bateleurs can take up to 8 years to shed all their juvenile feathers.

The Bateleur has an incredibly long wingspan and a short tail so its feet extend past the tail. The face area is surrounded in a red featherless skin that is artistically matched by its legs with the same bright red colour. 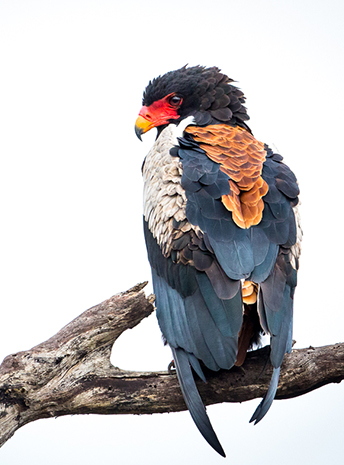 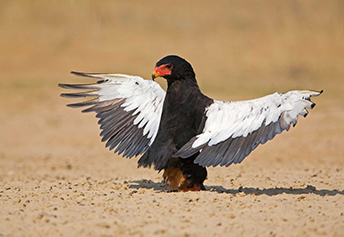 Bateleurs are powerful hunters and can hunt a variety of prey animals. These birds spend anywhere from 8 – 9 hours in the air looking for their prey. Their diet consists of mice, carrion, lizards, road kill, bird and even small antelope.

The female will lay her egg in a nest that is found in a large tree. The male tends to finding food and and sticks for the nest while the female stays and incubates the egg. The location of the nest provides great protection as very few animals can reach the nest. The hatchling is born after an incubation period of around 55 days. The hatchling can leave the nest after 110 day after hatching, but still receives food from the mother for 100 days.

The Bateleur eagle mates for life and can stay in the same nest for many years. Unpaired males can often be seen near nesting areas and are strangely not chased off by the nesting couple. A single bird can travel up to 300 miles in a single 8-9 hour flight time. Because the Bateleur travels vast distance each day, the population of the species is commonly over estimated.
The mating rituals of the Bateleur eagle is a rather interesting sight to behold. The male will perform a phoenix pose where it will stretch out its wings and it will stand upright to make itself larger and attract a female. The mating rituals also include different dives, rolls and loud crowing calls.

The Bateleur lives in various ranges over many different ranges of South Africa in more areas where there is more sand and less trees. It prefers large open grassland areas and acacia Savannah as they use the open plains to easy spot and hunt their prey.