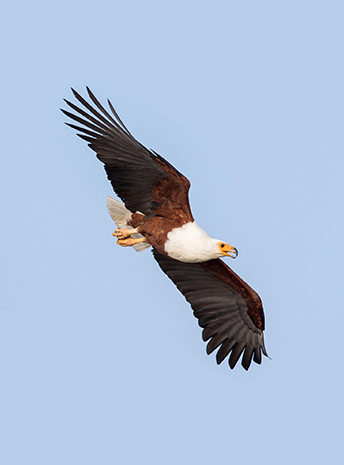 Like the name suggests, the Fish Eagle’s diet consists mainly of fish but they also hunt feed on other animals like smaller birds, flamingoes, rodents and other small mammals. African Fish Eagles often stay in areas close to water where their main prey can be found.

The Fish Eagle has two unique calls. The one call can be heard when they are near their nests that is a sounds like a quock while their call while perched or in flight is similar to that of an American Eagle. African Fish Eagles are generally seen in pairs both during and outside of breeding season and share the kills made by either of them.