The Nyala is an antelope that has a shaggy brown coat that has white stripes running vertically down the sides. They have a thick black mane that runs down their back to their tail as well as from its throat to its hind legs. They have some white spots on their undersides. The Bulls have long rear facing horns that reach lengths of 650mm. Bulls weigh 115kg and stands 1.05m at the shoulder. The cows are significantly smaller and have no horns, they weigh about 59kg and only stand 900mm at the shoulder.

This antelope is a grazer and browser that feeds leaves, fruits and flowers. 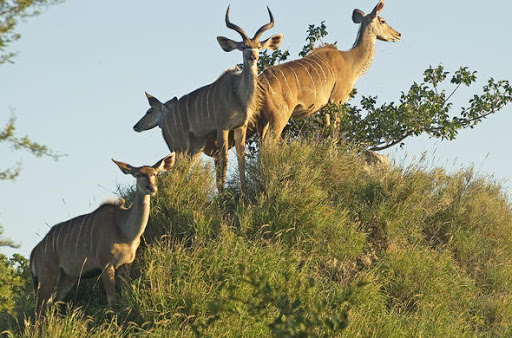 Nyalas are animals that can breed throughout the year. The mating peaks during spring and autumn. Single calves are born after about 220 days of gestation. It isn’t uncommon for twins to be born.

A very interesting fact is that juvenile males actually look like the females. This camouflage technique can actually be useful to hide the juveniles from the dominant bulls. Young males can live peacefully live in the protection of the herd.

Nyalas inhabit dense woods and thickets that are near permanent water sources. These animals are rather secretive and are easier to be seen during the night. Nyalas are non territorial animals and are known to share their territory with other bulls. These animals can be a rather common sighting during a Kruger Park Safari.