The Honey Badger is one of South Africa’s most fearsome and infamous animals that have a ferocious appetite and are extremely aggressive. Honey Badgers hare almost hyena like in appearance. They have a black coat with white stripes that run down their body. They have a very thick and bristly coat with very loose skin. They have long claws on their front paws that are used for digging out termite and ant mounds as well as scratching its attackers.

Honey Badgers are omnivores that will feed on anything they can get their teeth on. These animals are capable of hunting antelope and small mammals like rabbits, dassie and meerkats. They have a ferocious appetite and sport a very dangerous bite that have an unbelievable amount of pressure for an animal so small. Lions and leopards have been threatened by these fearsome animals and have on very rare occasion fallen prey to their sheer determination and ferociousness.

Honey Badgers usually give birth to two pups after a gestation period of six months and breed between the months of October and January. Honey Badgers are extremely protective of their young and will violently lash out to anything that comes near.

Like many other animals of the honey badger’s size and build, they have 5 toes with long claws on the front paws that are used to dig and self-defence while the hind feet have smaller claws. When on a Kruger Park Safari, you can spot its tracks and sometimes even see it in the grass. 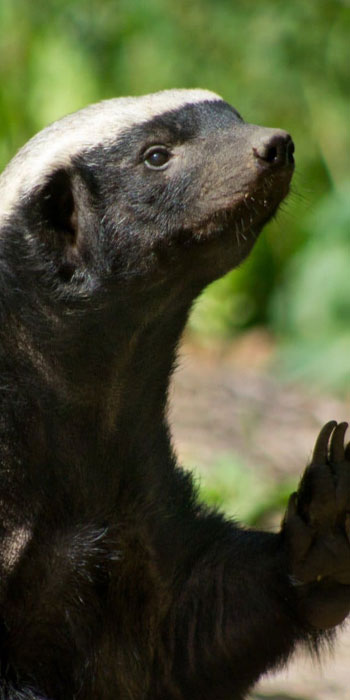