The Klipspringer is a small antelope that stands about 600mm at the shoulders and weighs about 13kg.The Ewe is a bit larger than the ram. Only the rams have a set of horns that are rounded at the base. They have rounded ears that are found a bit further back than usual. There are black marks in the ears. The have coarse hairs that can make their coats red, grey, brown or red. They have a white chin, nose and under side.

Klipspringers are very selective browsers that only feed on flowers, shrubs, fruits and shoots. Klipspringers very rarely ever eat grass and aren’t dependent on water.

Klipspringers have a gestation period of 6 months. After a year, the young are expelled from the group as they have reached maturity by then.

Rams and Ewes form a life long bond with each other and will find a territory that they will defend permanently. Up to eight klipspringers can be found in a group which are usually family groups from neighboring groups.

Klipspringers live in a restricted habitat in the form of mountainous areas and koppies. They are very nimble animals that are well at home in these areas. When threatened, they can escape up the unscalable walls and rock faces to stay out of reach of their threats. You will have a good chance of spotting these tiny antelope when you are near rocky, hill areas while you are on a Kruger Park Private Safari.

Klipspringers are distributed all over South Africa. In areas like Zoutpansberg, Namib river, Orange River and some areas of the Western Cape. They are strangely less common in the Drakensburg mountains. 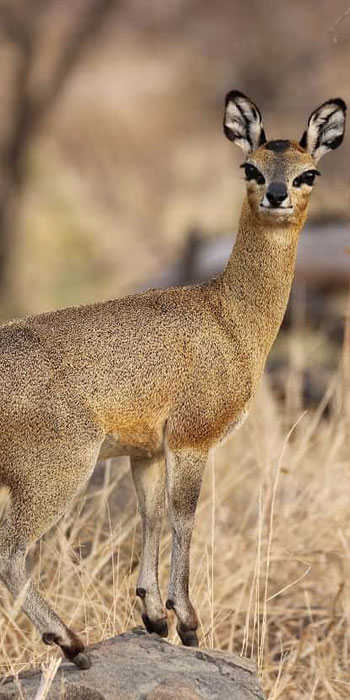