Depending on what is available, the Cape Hare will either be a grazer or a browser. The hares would ingest the soft feces pellets they excrete during the day and they excrete hard pellets during the nights.

The Cape hare breeds throughout the year but the peak of birthing is usually during the rainy season. After a gestation period of 42 days, the Hare will give birth to up to 3 leverets. The young weigh about 100 grams and are fully furred at birth. Their eyes are open at birth but are unable to see and hear after about 48 hours.

Generally solitary animals, the females usually travel alone unless she is on her cycle, then she will usually be followed by several males. They prefer open, arid terrain with open grass patches.

Where could you find them?

The Cape Hare can be found in arid areas of South Africa. They can also be found in Botswana and central areas of Namibia. During a Kruger National Park Safari, you can spot them in the more arid areas of the Park to the North. 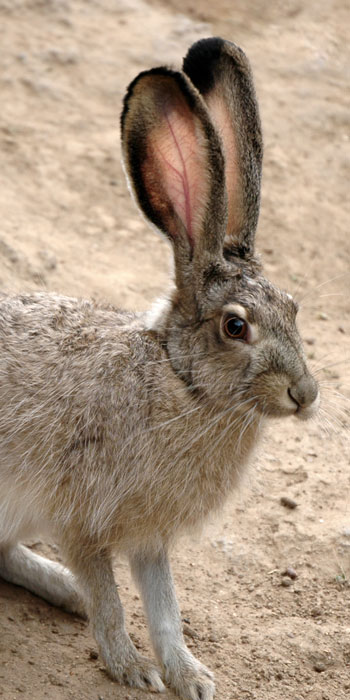