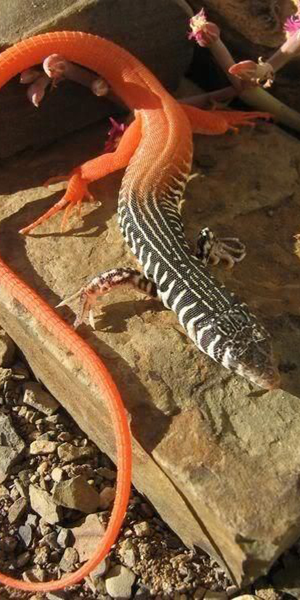 The Ornate Sandveld Lizard is a quite large lizard that has a main body colour that is lightly coloured with a dark brown botched pattern that turns a bright orange from the rear legs down to its tail. It has a semi pointed head with long fingered claws.

Like many species of lizard it’s diet consists of large bugs like grasshoppers, centipedes, beetles and crickets. The lizard’s speed and nimbleness allow it to easily pursue its prey and to quickly ambush.

The Ornate Sandveld Lizard is quite widely spead throughout Africa and Southern Africa. They can be found in areas from the Lebombo Mountains and the Northern Zululand through Mpumalanga, Swaziland, Zimbabwe and North Gauteng to Malawi, South Zimbabwe and South-Eastern Tanzania.

During the Midsummer, the female Ornate Sandveld Lizard will lay between 5 and 7 eggs in rocky areas that are safe from predators.