The Kruger National Park is home to about 500 species of birds. Some are sweet sirens while others have a taste for blood.

The Secretary Bird might have a truly unassuming name but in reality it is a strange raptor. It has earned the name “Africa’s Marching eagle”, because it hunts on the ground rather than in the style of other raptors who hunt from the sky.

The Secretary Bird, although it does not look the part, is in fact a carnivore and eats most small vertebrates.  It includes snakes and birds in its diet and can even swallow a small tortoise whole

Secretary Birds are known to flush out their prey by stomping around in tall grass.  It is also known to wait near veld fires, where it catches anything trying to escape.   Snakes are killed by the Secretary Bird jumping on its back and then trying to snap or break the snakes back or neck.

Secretary Birds are known to tear their prey apart to eat it like raptors but are also known to just swallow the prey whole. 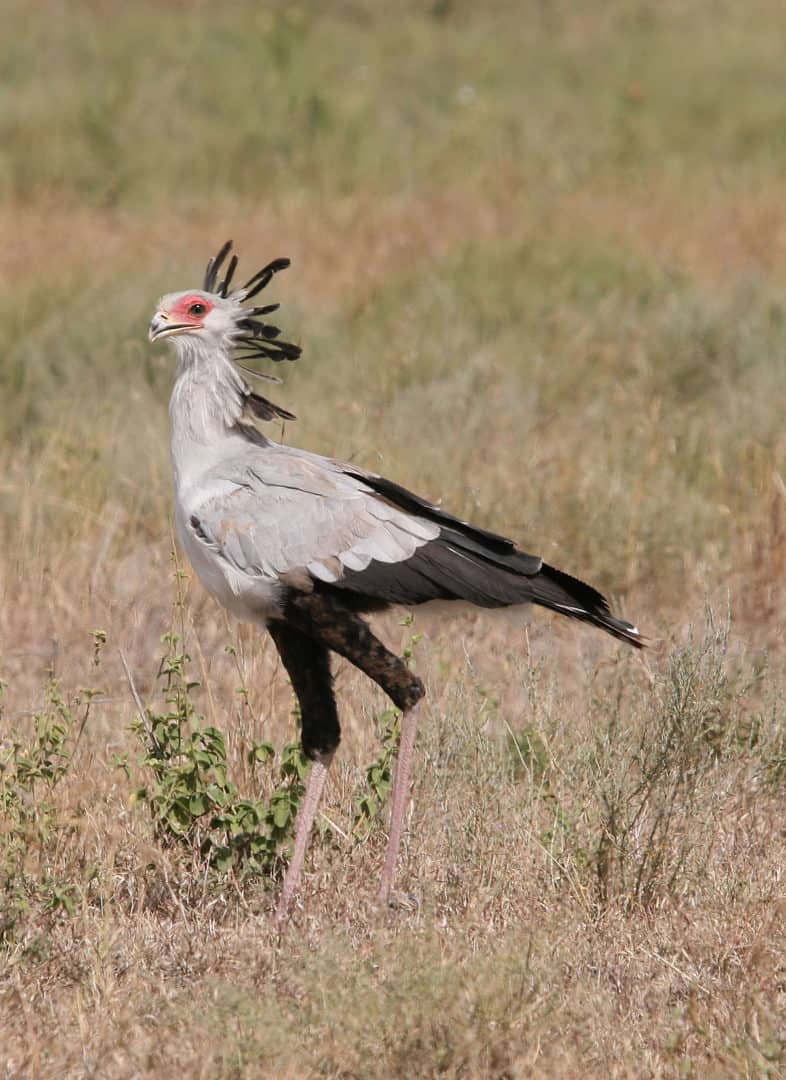 This raptor is said to have gotten its name from its crest of long quill like feathers, giving it the appearance of a secretary with quill pens tucked behind their ears. Its grey and black tail feathers are reminiscent of tailcoats.

At a closer look you will notice that this raptor has an eagle like head and hooked beak.  That is where the “raptor look” starts and ends as this bird has rounded wings and two central tail feathers. During flight it actually resembles a crane.

Even though the Secretary Bird spends most of its time on the ground, when it comes to roosting, they can be found high in the Acacia trees where they build their nests.  Secretary Birds are monogamous and even stay together after the chicks have left the nest.

Most Secretary Birds mate on the ground although they do at times mate in trees.  Nests are flat, consisting of sticks knitted together, often measuring up to 2.5 meters in width and they have a depth of 30 cm.  Secretary Birds lay two to three eggs which hatch after 45 days.  Once the eggs have hatched, both parents feed the young until they fledge after about 70 days.

Where can you spot this raptor?

Secretary Birds are known to fly great distances in search of better feeding.  They have also being seen soaring on the thermals like vultures at great heights.

Adult Secretary Birds have no known predators, but their young are often preyed upon by crows, ravens, hornbills and even large owls while they are left vulnerable in their nests. The main threat to Secretary Birds is loss of habitat and deforestation.

We have often spotted these amazing birds while enjoying a Kruger Park safari. Join us for the next one, and perhaps you might see one as well.