The Brown-headed Parrot is a rather colourful bird, with a mainly green body with yellow markings mixed in. The underside of the wings are a bright yellow colour and its head is a light yellowish-brown. They have white beaks with a black tip on the upper mandible. They have greyish white irises and black markings on their bodies. The amount of black is different from individual to individual. 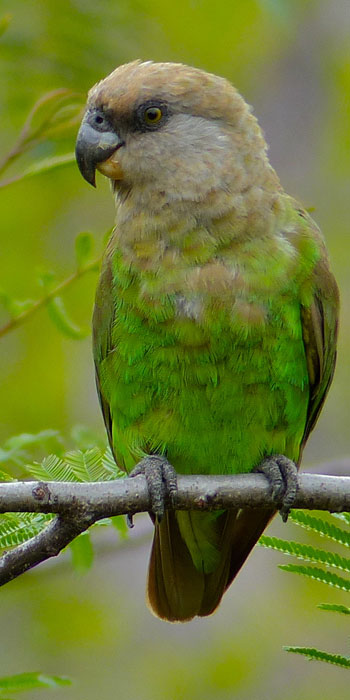 Brown-headed Parrots have a simple diet that consists mainly of seeds, nuts, berries, flowers and fruits. Brown-headed Parrot have been known to raid millet and cornfields and are considered pests in the agricultural sector in certain areas. They can be seen in groups of up to 50 looking for food.

Brown Heads are considered mature at the age of 2 years old. Breeding Season for these birds is during the winter months but can breed year-round. The female will lay up to 4 eggs at a time. Pairs will breed up to 3 times a year. The Incubation period is about 28 days. The Young will be fully weaned by day 28.

Brown-headed Parrots can usually be seen in pairs and small groups and prefer very large trees so large groups can gather at a time. These birds are very shy and their green colouration allows them to camouflage well in the trees. They are usually only seen when they are flying from tree to tree. Brown-headed Parrots have been recorded previously to group up with Cape Parrots.