The Waterbuck is a large, robust antelope, with males reaching 1.4m at the shoulder and weighing up to 260kg.  The Cows are smaller than the bulls. The coat of the Waterbuck is a shaggy brown-grey colour with a white, patchy colour on its neck. They have a dark ridge down their backs, the iconic white rings on their rears and white around their eyes and mouth. Bulls have large curved horns while the cows have none. Both sexes release an unpleasant musky smell that can often linger at areas.

Waterbuck are grazers that feed near water sources. They will browse when grass cover is in poor condition. Waterbuck are very dependant on water and will drink daily.

Mating peaks during winter but can happen in lesser frequencies throughout the year. After a 9-month gestation period, a single calf is born with the rare occasion of twins. Births tend to peak during the summer months.

Waterbuck are gregarious antelope with dominant bulls occupying their territories using aggressive posturing and sometimes even fights. Cows, Calves and Bachelors travel together in herds. Individuals are free to join and leave these congregate herds as they will. There antelope are strong swimmers and will take to the water when threatened.

Waterbuck live in areas with lots of water and strong dense wooded areas. These waterbucks will often venture to more open flood lands and woodlands for food.

Where they can be Found

Waterbuck can ve found along major drain systems in Mpumalanga, Northern Provence and Kwazulu-Natal. As of recent, they have been slowly introduced into St. Lucia and Itala Game Reserve. 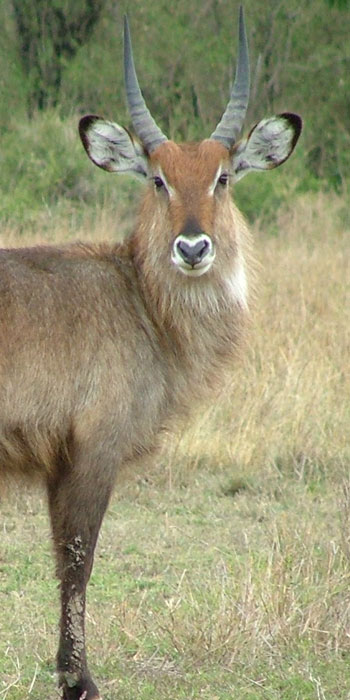