The Cape Genet stands 210mm at the shoulder as the Genet is a short-legged animal. This animal has a long slender body that stretches 460mm and weighs 1.6 kg. It has a thick greyish and black ringed tail that can reach up to 400mm. The claws of the Cape Genet are short and semi retractable that it uses to climb trees easily. There is no sexual dimorphism between the males and female. Both genders have a white-greyish underside with tan upperparts. Their upperparts are littered with rusty dots surrounded with a black ring. There are a pair of white spots on either side of the mouth, nose, tail and eyes.

Because the Genet is a small animal, its prey consists of mostly rodents and other small insect eating mammals. Its secondary diet consists of small birds, amphibians and snakes. Fruits and invertebrates make up a very small portion of the Genet’s diet. Genets have been known to consume grass as a means of getting rid of any toxins it may have ingested by inducing vomiting to remove the harmful substance.

Breeding usually takes place during the warmer months. On average 3 young are born in a single litter after a gestation period of 70 days. The young remain in their nests until they are fully weaned. Since they prefer living in wooded areas, their young are generally safe from most predators as they care concealed nicely in the foliage

Cape Genets are solitary species that will only interact or be seen in groups during mating season. They prefer hanging around in watered areas as well as wooded areas for protection from predators as well as shelter from the environment. Their preference in habitat gives them easy access to water. 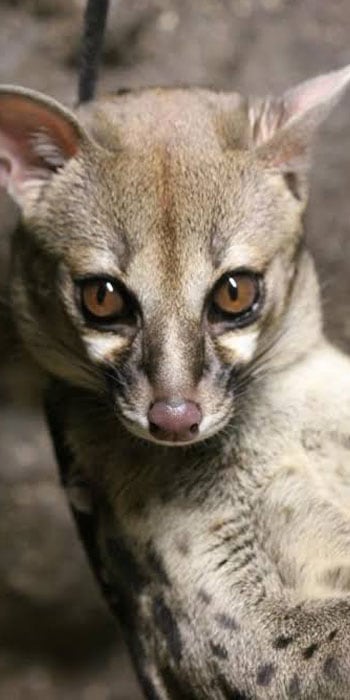