The Lesser Yellow House Bat is very similar in appearance than the rest of the members in its family with the only difference being it is slightly smaller than the rest. Its total length from head to tail is only 120mm and weighs a measly 16gr. Its fur is short, silky and dense and has a yellowish brown colour with the belly being an off white.

The Lesser Yellow House Bat prefers to feed on insects mid flight under the safety of the tree canopy. It has adapted to feed on beetles though it does prefer soft-body insects more.

An interesting fact about the breeding habits of these bats are that the female has a much higher chance to give birth to twins than to a single pup. Pups are usually born late in the year, end of November to early December.

The Lesser Yellow House Bat is actually a very solitary animal. It builds it’s roost in hollowed out trees. They have multiple roosts kilometers around the foraging areas that they return to from an early morning’s foraging. When in a foraging area, they will go to one of the closer roosts. They use this strategy to avoid being preyed on by most of their predators. There are times where they will gather into small colonies in the nooks of houses.

They can be found in any areas where the Yellow House Bats can be found though they are not as widely spread as the normal yellow house bat, you can see them in the Kruger National Park in the camps under grass roofs. They can not be found in arid and semi dry areas of the Kalahari. 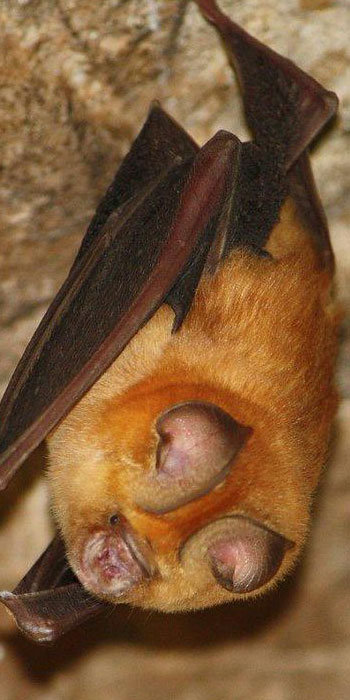