The Lichtenstein’s Hartebeest is a large species of antelope with humped shoulders, an elongated head and a sloping back. Cows can weigh up to 180 kg and fully-grown adult bulls can weigh 200kg. These massive animals stand at 1.2m from the shoulder down. The Coat of the Lichtenstein’s Hartebeest is a tawny colour that has a darker spot on its back, behind the hump, that resembles the look of a saddle. The hind legs, under parts of the tail and the rump are off white in colour. The fronts of the legs as well as the tips of the tails are black. On the flanks of the Lichtenstein’s Hartebeest has a very unique darker patch that is caused by it rubbing its head against its flank. Both the males and females have S shaped horns that are about the same shape. The Bull’s horns are thicker at the base.

The Lichtenstein’s Hartebeest is a grazer that prefers feeding on perennial grass that grows between freshly burnt areas. They come out in the morning and afternoons when it is cooler.

The Lichtenstein’s Hartebeests have a gestation period of 240 days where after a single offspring is born. Females generally calf between August and September. Females will try to calf at the same time and it is considered an Anti-Predator mechanism. Females reach sexual maturity by 16 months and calves are weaned by 12 months.

Lichtenstein’s Hartebeest herds consist of about 10 members. A single bull can have up to 7 females with all of their offspring. The young bulls are expelled from the herd after about 12 months and the females are expelled after 18 months. The territorial bull will defend its territory and females from other males and predators, especially during the calving period.

Lichtenstein’s Hartebeests are found in large open habitats with an adequate supply for them to cool off and drink and therefore they are only seen in places with high rainfall. They are very rare in the Kruger National Park but are well worth it when you spot them while on a Kruger Park Safari.

Where they are found

The Lichtenstein’s Hartebeest has a very small habitat and is found in a marginally small area around the Kruger National Park. It was thought to have gone extinct but populations have been established and the numbers have increased greatly and relocated to several areas. 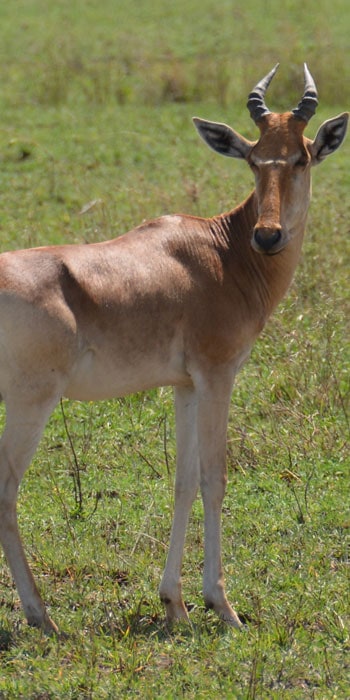