The African Elephant is the world’s largest land mammal that weighs up to 7 Tonnes and can reach heights of 3 m at the shoulder. Elephants have an average lifespan of 70 years. Older bulls can have tusks that weigh up to 55kg with some rare instances of tusks weighing an astounding 90 kg.

The African Elephant is a very iconic animal not only in the Kruger National Park, but also worldwide. The African Elephant has a very thick, wrinkled skin that are a dusty grey colour but can also have a reddish-brown colour. He elephant has a large head with large ears. The ears are thin and full of blood vessels that help the elephant regulate its temperature, it has a long trunk that it uses as a controllable appendage to rip leaves from trees and can even pick out a small thorn in its foot with its finger like tip. One of the Elephant’s defensive features are its long tusks that can weigh up to 55kg each. The Elephant has thick, trunk like legs that carries its massive body weight. Though the skin of the elephant is on average 3 cm thick, it is quite sensitive.

Elephants have a tremendous appetite and can consume up to 280 kg of grass, shoots and bark from trees. Such an amazing hunger is also paired with a big thirst drinking up to 200 litres of water a day. A single elephant can defecate a massive 150 kg of faeces a day.

African elephants are non-seasonal breeders as they only produce a single offspring every 3 to 4 years. African Elephants have a gestation period of 22 months. Calves can weigh up to 100 kg and are usually fully weaned by 20 months. When claves are left abandoned, other herds of Elephants will adopt the calf into the herd and take care of it. The reason for tis adoptive nature is Elephant Cows have very strong maternal instincts. Elephant calves develop tusks by 16 months but only start showing by 30 months. Females are sexually active by 11 years and stay in the herd while males, who mature 13 years are expelled. Though males can reproduce early, they usually wait until they are 20 years old or when they have climbed in the hierarchy. 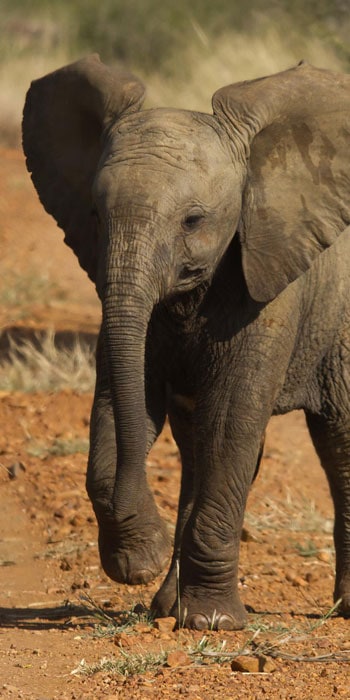 Males that have matured and got expelled from their maternal herds will form bachelor herds and then later some of them will become solitary bulls. Family herds usually consists of an older matriarch with many other cows with their offspring. Though elephants drink a lot of water, they love wading and rolling in the water and mud, not only to cool down but also to get rid of parasites. Many believed that herds are led by a dominant bull but bulls are only in herds if they are looking for a female to mate with. Many family herds have interrelated members which means that the herds know each other well.

Elephants are extremely intelligent animals and each elephant has their own personality and character, making detecting a mock charge difficult at some times. Common signs of an elephant’s mock charge dust throwing, bush breaking, trumpeting and open ears. If an elephant is startled or if it is aggressive, the elephant will shake its ears wildly to display its irritation. After all the attempts to scare off what is threatening it the elephant will become aggressive and charge. A elephant will pin its ears against its body and lower its trunk when it is preparing to charge.

Elephants used to roam a large portion of South Africa but because of excessive poaching the elephant was on the brink of extinction. Numbers have greatly increased in the last few decades. The areas they can be seen are very limited to the Kruger National Park and the Addo Elephant Park, which protect the large herds. Due to rigorous conservation efforts, the population has increased from 120 in 1920 to more than 20,000 to date. These amazing animals are always a terrifying yet amazing sight to see while on a Kruger National Park Safari.