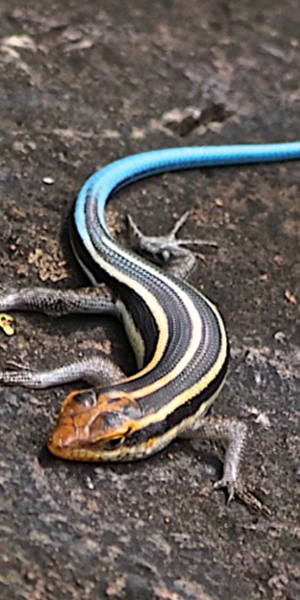 The Rainbow Skink is a large skink that is primarily black in colour with yellow-brown stripes traveling from its head to the base of its tail. Its tail is a deep blue colour with some traces of black mixed in. Its face often has a reddish colouration that blends into the stripes. Its legs are black with yellow-brown spots dotting the surface.

The Rainbow Skink is quite a common lizard that covers a wide range from KwaZulu-Natal to Zimbabwe and the Lowveld to Senegal and Algeria. They prefer rocky terrain with lots of crevices and cracks to flee to.

The female will lay anywhere from 6 – 10 eggs in the summer months. The young hatch after an incubation period of 62 days. It is possible for a female to lay two clutches of eggs per season, specifically in the northern regions of South Africa.