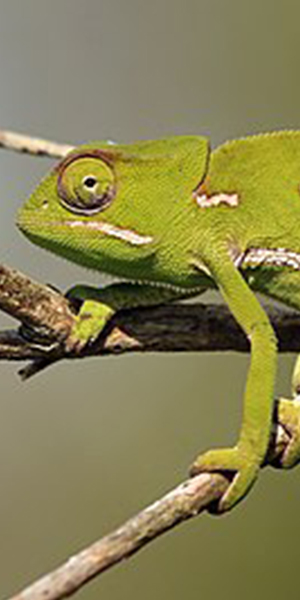 The Flap Necked Chameleon is a large chameleon that has a Small flap extending from the back of its head. It has a crest that extends along its back and underside, from head to tail, that consists of tiny, white triangular spines. The main colour of the Flap Necked Chameleon is a lime green colour that varies through different shades of green. It has a white belly with pale bars on its side.

The Flap Necked Chameleon is an insectivore whose diet consists mainly of grasshoppers and beetles. It feeds by projecting its tongue towards a prey item. The tip of the tongue is sticky that allows it to stick to its prey. A chameleon’s tongue stretches twice the length of the body when projected.

These Chameleons can be found in the tropical regions of Africa, south towards KwaZulu-Natal, Mpumalanga, North and Eastern Botswana, all the way to the Northern Cape and North Namibia. They are often found crossing the road and on branches of green trees.

The female will lay anywhere from 25 – 50 eggs in the summer months. Chameleons take very long to develop as the eggs take little over a year to hatch, at 377 days when in the wild.