The Tsessebe bull has a weight of 140kg and measures up too 1.2m at the shoulders. The Bulls are only slightly larger than cows, with the cows only weighing 120kg. Both the Bulls and cows grow horns, but those on a bull are much heavier. The horn shape resembles a halfmoon shape when viewed from the front. They have a reddish-brown coat colour with a dark face and purple blotches on their shoulders.

Tsessebe are grazing animals that can feed on a variety of grass species. Tsessebe are rather picky animals that only prefer the leaves to the roots and also prefer fresh growth and are usually found around burnt areas.

Tsessebe are seasonal breeders that have a gestation period of 7 months. After the gestation period, a single calf is born, usually between September and October. During the mating ritual, the bull will perform elaborate displays towards the females.

Tsessebe are very social animals whose basic group structure consists of small groups consisting of 6 to 10 cows and their calves. Bachelor groups can contain up to 30 bulls. This is very visible near watering holes. Breeding herds of females are not restricted to a specific territory. Young bulls will form bachelor herds at the age of 1 year.

Tsessebe are confined to the northern savannah woodlands of South Africa. They are mostly confined in the Kruger National Park and other provincial game parks. 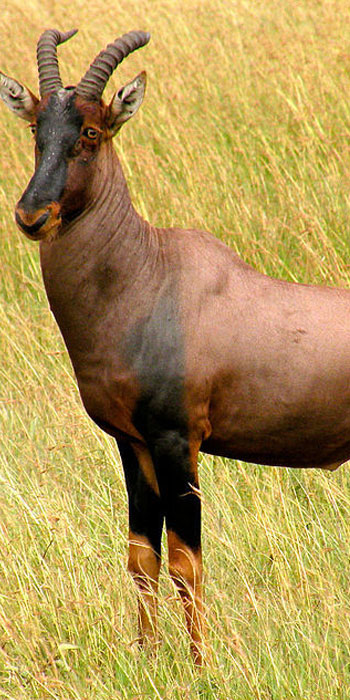