Nature is a wonderful and beautiful thing as each and every single animal is unique and special, with their own unique way of survival. One of the ways animals have been blessed with to survive is the use of camouflage, the ability to conceal yourself in your environment using colour, shapes or extra attachments, though the latter mostly goes with insects. Camouflage is the most common method used by predators to hunt, concealing themselves in their environment to they can come close to pounce. Lets discuss some of the animals that are rather difficult to spot in the Kruger National Park, let’s try and not get surprised.

The leopard is a very secretive and solitary animal that is a master in camouflage. The Leopard spends most of the day in the trees waiting out the heat so they can go hunting. Leopards are the perfect combination between power and speed allowing them to take down larger prey quickly and efficiently. A leopard’s coat is a tawny colour that immediately matches the colour of the savannah grass. The Leopard has black rosettes that cover its tawny coat with an orange tint in the rosettes. These rosettes and tawny coat allows the leopard to blend into the tall grass as the spots make it difficult to differentiate shadows.

The Spotted Hyena is an infamous animal in the Kruger National Park, known for its spine chilling cackle and ruthless hunting efficiency. Unlike a leopard, the spotted hyena hunts in packs, allowing them to surround and overwhelm larger prey. The Spotted hyena has a dark tawny colour that is almost brown. The Spotted Hyena’s iconic black spots cover its coat. The lack of any bright and observable colours allow the hyena packs to travel in the grass visually unnoticed. Their camouflage also helps them hunt during the night, where their dark appearance allows them to blend into the darkness. 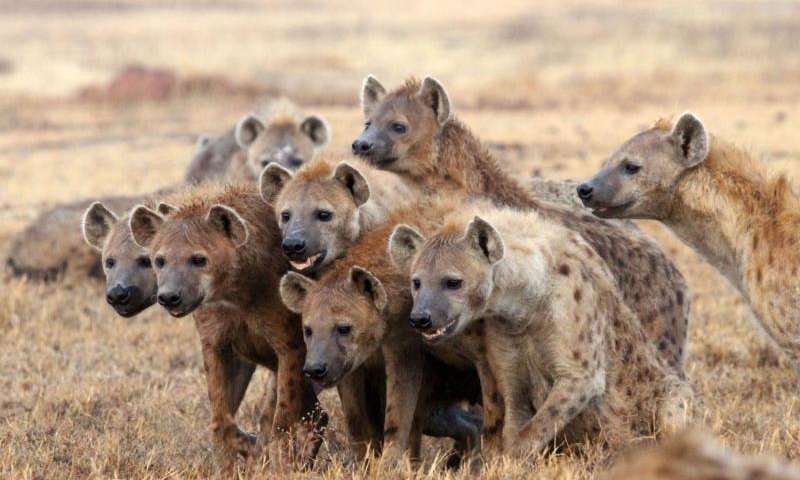 The Nile Croc is an aquatic reptilian predator that has mastered the art of camouflage. The Nile Crocodile is located in any large body of water like rivers, lakes and dams, which give it access to plenty of prey options in the form of animals that come to the water’s edge to drink. The crocodile’s rough and craggy exterior resembles a piece of wood drifting in the water, allowing it to travel in the water without giving itself away. When close to the water’s edge, the crocodile will dart out of the water, grabbing its victim from the shore.

The Puff Adder is the snake that is responsible for the most human casualties in Africa. The Puff Adder is an aggressive viper that can be found in the wild as well as residential areas. The Body of the Puff Adder resembles colours of dried and old leave, which makes the snake near invisible while hiding. The Puff Adder does not give a warning before striking making it very difficult to come out unscathed unless you’ve spotted the snake.