One of the more rare animals you’ll have the opportunity of coming across during a Kruger Park safari is the hyena. These fascinating animals are found all over the park and in this blog we’re going to share some of the must know information.

The Spotted Hyena is the hyena that can be seen that can be seen in the Kruger National Park.  These untidy looking animals are neither a member of the dog or cat family, they are a member of their own family known as, hyaenidae.  They stand about 80cm at the shoulder and weigh up to 60 kg. Their backs are sloping and they have a shaggy unkept look.  Hyena can crush a thigh bone of a buffalo in one movement with their powerful jaws.  A hungry hyena can eat up to a third of its own body weight.

The Spotted Hyena usually has two cubs, which are born aggressive.  They are born dark brown with their teeth and their eyes open. Cubs are born in a den which the mother digs out and kept there till they are at least three weeks old. After this their fur becomes lighter and they start getting spots. 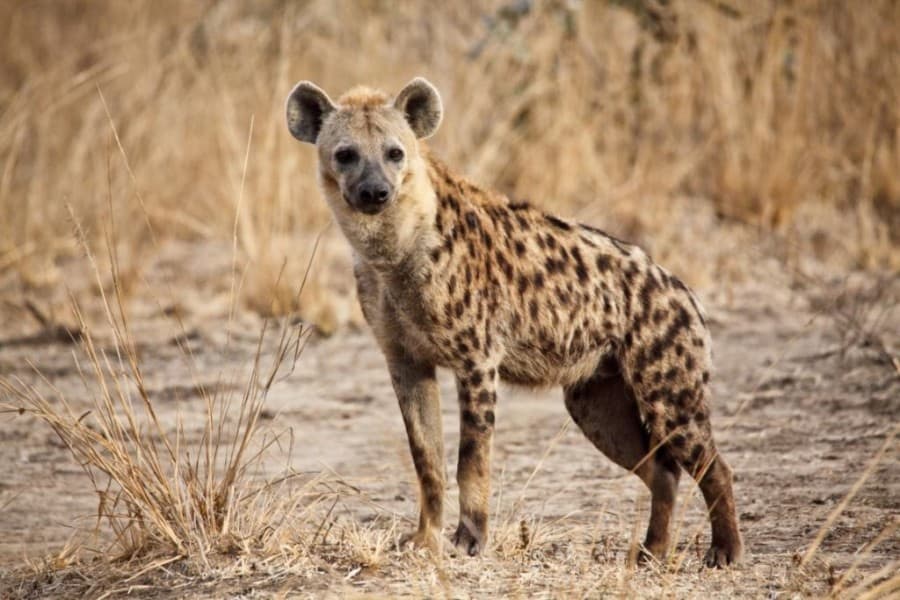 Hyenas hunt and scavenge at night.   Hyena are carnivores, of the opportunistic kind for the best part.  If hyena are the dominant predator in an area, they will hunt their own prey, but if there are other predators in an area they tend to scavenge.  Fearlessly they will take a chance to grab food away from other predators, often paying with their lives.   When hyena hunt, it is generally in packs, cunningly seeking out the weakest in the herd and then isolating it before relentlessly pursuing it over several kilometres, until the prey is totally exhausted.    At this stage the pack of hyena pull the animal down and disembowel it.  As a pack, hyena will go for the big game, zebra or kudu, but if they hunting alone, they hunt smaller animals such as baboon or guinea fowl.  Lions and Hyena detest each other, and will often kill each other’s cubs or weak.  As weary as hyena are of lions, they are unafraid of lionesses, and will easily take a kill from a lioness when there are no lions around.  Watching the sky for vultures circling a kill, these cunning animals then take off to find the kill.  In times of drought, hyena have been seen eating the fish that are dying in the drying up water holes.

Hyena “laugh” hysterically, eerily giggling in an almost human like tone, quite unlike the mighty roar of the lion.  In the middle ages it was believed that the hyena would dig up corpses and eat them.  In some cultures they are believed to have magical power and belong to witches.  It is believed that they are the witch’s cattle and come out at night with the witches.  In some folklore, should a child be born at night while a hyena is crying, that child will grow up to be a thief.  Another tribe in Africa believes that if you want your child to walk at an early age you need to ensure that the child has hyena dung kept somewhere on their person.

Although they are not always an everyday sighting, the more time you spend in the Kruger, the more opportunities you will have to see them. Book your Kruger National Park safari today.