The Steenbok is a smallish antelope that stands at 520mm at the shoulders and weighs 11kg. The coat of the steenbok is a rufous brown colour with underparts are pure white. The rams have short upright horns the projects from just above the eyes. They have conspicuous black facial glands behind the nose that are noticeable with both sexes.

The diet of this fleet footed antelope consists of mainly of browsing and has a preference for forbs. These animals are very picky and prefer very green material like young green leaves, fruits, flowers and shoots. These animals can live independently from water sources which is because of the food they consume. During the dry months, Steenbok can feed on bulbs, shoots and roots as they are very nutritious and contain a lot of moisture.

There are no specified breeding seasons as births have been recorded throughout the year. They have a gestation period of 7 months afterwards a single lamb is born. Lams are hidden from the world for around 4 months while they are still growing up. The mother only interacts twice a day, once in the morning and once in the afternoon to groom and feed it. To keep the lamb hidden and safe, the mother consumes the lamb’s faeces and urine to conceal the scent.

Rams and ewes will share and defend their territories from other family groups. Males mark their territories by using faeces, urine and the scent glands under their chins. Their territory borders are usually determined by roads and telephone poles. These animals have been known to scavenge meat from carcasses and kill small birds but they only resort to this when there are severe food shortages.

Steenbok generally live in open savannah country where there are adequate cover, tall grass and lots of bushes. They are very rarely seen in wooded and forested areas. They will take cover in old ant bear holes and raises their young in these holes. 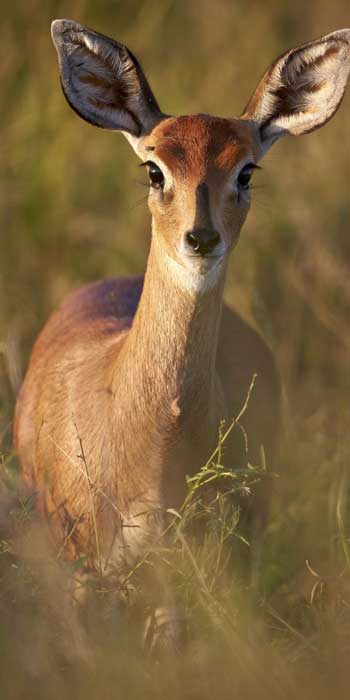