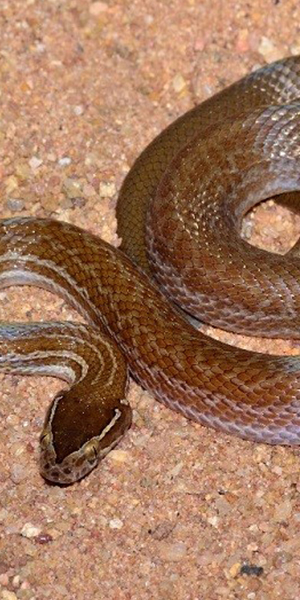 The Brown House Snake is a large house snake that has a head and scales that is easily identifiable. It has a uniform red-brown colour that gets darker with the snake’s age with some individuals appearing almost black in colour. The Brown House Snake has light brown/ beige stripes that stretches from its head along the sides of its body.

The Brown House Snake has a diet that consists mainly of lizards and small rodents. It does not have any venom so it bites onto its prey, suffocating it before swallowing whole.

Females lay their eggs in the summer months. She lays a maximum of 16 eggs in a clutch and the eggs take up to 90 days to develop, with the younglings reaching a length of 260mm.