The Bateleur Eagle is another iconic bird that can be found in the Kruger National Park. The Bateleur has a primarily black body, with a brown back and tail feathers. They have multi coloured wings that are beige, white, grey and black. Bateleurs live primarily in desert areas where there are no forests around. They primarily hunt antelope, lizards, snakes, mice and carrion. This is a very powerful raptor that can take down prey slightly larger than them. Bateleurs spend up to 9 hours a day in the air and use its powerful eyesight to spot the prey down below.

The Scops owl is a snowy coloured owl that has black, white, grey and brown feathers that can make it difficult to spot in the skies. Scops owls are actually insectivores that feed primarily on insects but will also feed on small birds, rodents and mammals. Like a majority of owls, the Scops Owl is also a nocturnal animal. The Scops Owl prefers bush and forest areas as it uses the branches, leaves and tree tops to its advantage to stalk its prey. 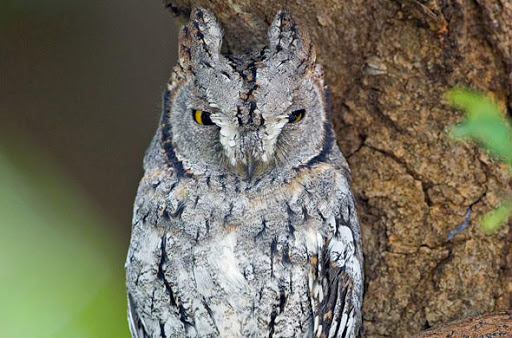 The goshawk is one of the most common species of smaller hawks in the Kruger National Park. The African Goshawk prefers to live in forested areas instead of open plains. They feed mainly on small birds, bats, rodents as well as reptiles, crabs and squirrels. African Goshawks prefer to hunt around its nesting area. The Female goshawks are larger than the males but less rufous. They have a unique chip and whit sounds that make it easier to identify.

The White Headed Vulture is one of the oldest endemic vulture species in Africa. These Birds have had a steep decline in their population due to their habitats degrading and them being poisoned while eating at carcasses. The White Headed Vulture is a primarily brown – black body with brown gradients on its feathers with a bleach white head. These vultures generally feed on carrion, carcasses of previous hunts, mongoose, monitor lizards hare and sometimes birds. These birds prefer the warmer, sandy areas that allow them to easily spot prey.