These sea faring birds may seem like they have totally black feathers, but if you look closer, you will see that the feathers are a combination of different dark colours including ultramarine, bronze, green and violet. When breeding starts, their plumage are intensely bright patches that appear in a range of different colours around the eyes and their throat.

The Comorant is 63-101cm in length with a distinctive long and slender bill with large feet, making them expert and fast swimmers and difficult walkers. Because of the body built for swimming, its flying capabilities are greatly affected. These birds tend to stay close to their roosts. 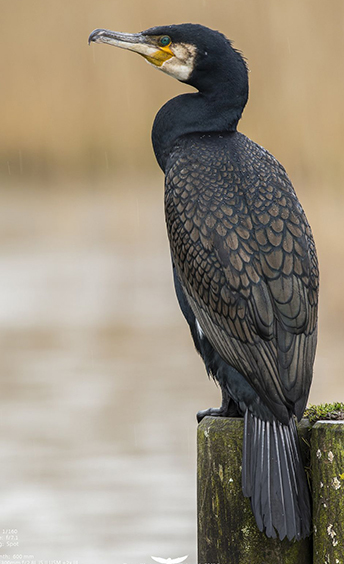 Comorants can be found near fresh and salt water, with their diet consisting mainly of fish, with the occasional amphibian and crustacean also consumed.

The Comorant lays up to 5 chalky blue-green eggs in a nest, built on a platform of sticks/ seaweed and are placed in a tree or a cliff or rocky island. These birds often reuse the nests and these birds nest in colonies.

Though the Comorant is built to be in the water, it lacks the waterproofing oils that all sea birds have which means they have to dry off their wings before they are able to fly. These birds use traditional nesting sites which can be used for many generations. The guano from all these generations can build up for years. These birds are very clumsy on land and prefer to keep their nests in areas that are away from mammalian predators.

Comorants prefer coastal areas and areas where the land meets the water. They can mostly be found near lakes, swamps, marshes and coasts.