Most of us visiting the Kruger National Park, look at eye level or up to see what the park has on offer.  Little do we realise that there are numerous smaller animals to be seen should we look a little lower to the ground.  Let’s take a look at the “Small Five” buck that you might see when on a Kruger Park safari with Kurt Safari.

The Bushbuck is closely related to the Kudu and Nyala but is only 70cm at shoulder height and weighs a maximum of 54kg.  Bushbuck rams have dark grey-brown fur with white spots on the flanks and sport white “socks”.  Bushbuck have extremely sharp horns and can be dangerous when wounded.  The females are smaller with more pronounced spots and stripes.  Bushbuck can be found at the base of mountains or along rivers as long as there is a source of water close by.  Bushbuck are extremely solitary animals and even the females have minimal interaction with the young, spending only a few hours a day with them.  Leopards, Lions, Hyena and Cheetah are all predators of the bushbuck, but male bushbuck, if cornered will fight back and even attack if necessary.

Red Duikers live in bush near rivers, mountains and rocky areas. Preferable they live on their own but have been known to live in small herds. Grey Duikers prefer to live in the scrub and bushes on the own, only meeting up with mates in mating season. 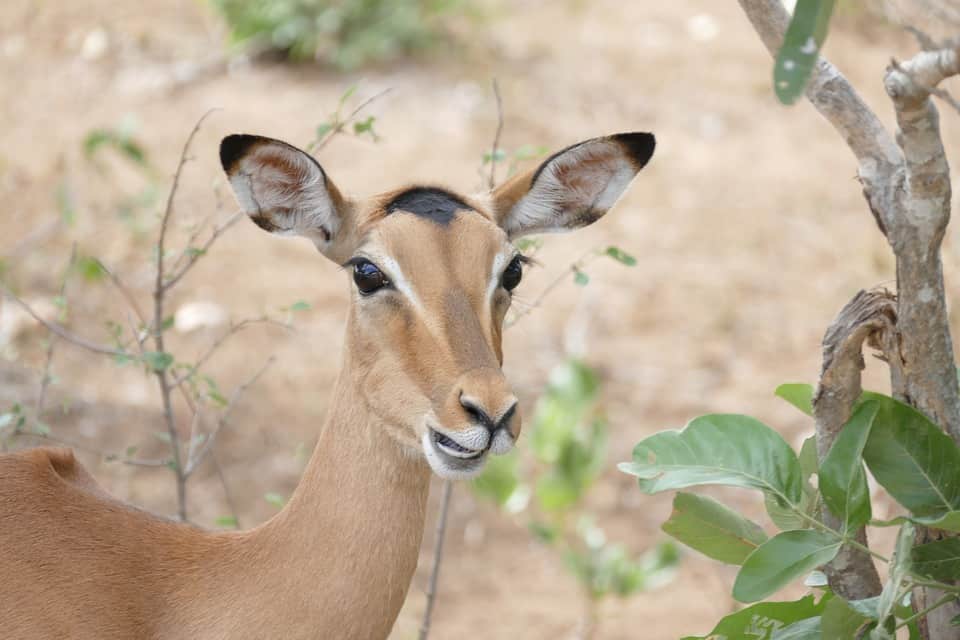 The Steenbok is brown to fawn in colour with pure white underparts and have long broad ears.  Steenbok weighs only about 11kg and grown to a height of 52cm.  Projecting above the eyes, only the rams sport upright, slender horns.  Steenbok can be found in open savannah lands that have taller grass and bushes that can be used as cover.  Steenbok are commonly found throughout the Kruger National Park.  Their natural predators include Leopard, Wild Dogs, Cheetah, Hyena and even Python and Martial Eagle.

Klipspringer, meaning “Rock Jumper” is a very apt name for this animal as it seemingly moves on tiptoe with the greatest of ease in rocky territory.  The Klipspringer is only about 60cm in height and weighs roughly 12kg.  This animal has a stocky build and the females are slightly larger than the males.  Their coats vary in colour with shades of grey, yellow-brown or red with white underneath, white chin and lips.  Ewes give birth to a single lamb after a gestation period of six months.  Klipspringers reach maturity at a year, and are then evicted from the group.

The Sharpe’s Grysbok grazes at night or in the early morning hours and then rest during the heat of the day.  These small mammals can be found in the northeastern Lebombo mountain range and north of that.  The female and male Sharpe’s Grysbok have their own territories which they mark independently with dung middens.  At shoulder height, the Sharpe’s Grysbok is only 50cm and weighs about 8 kg.  Rams have horns measuring about 6 – 10 cm.  Sharpe’s Grysbok are browsers, feeding on leaves, young shoots of shrubs and bushes.