Dwarf Mongoose diets consist of larvae, grasshoppers, termites and beetles. When the occasion arises, the Dwarf Mongoose will also eat small vertebrates. Usually foraging in troops that also help out with spotting predators.

Dwarf Mongoose have a gestation period of 63 days and an alpha female can have up to 3 litters a year. The Breeding period of Dwarf Mongoose are set within the raining season. An interesting behavior in breeding within packs, is only the Alpha pair is allowed to breed while the rest rear and raise the young. No other members are allowed to bred or else banishment or worse may happen.

Dwarf Mongoose prefer dry woodland areas of the savannah. The Northern and Northwestern Provinces, North KwaZulu-Natal and Mpumalanga are the farthest South the spread of mongoose go. They are much more common in the Northern Countries of Africa. It is very likely to spot a Dwarf Mongoose while on a Kruger Tour. 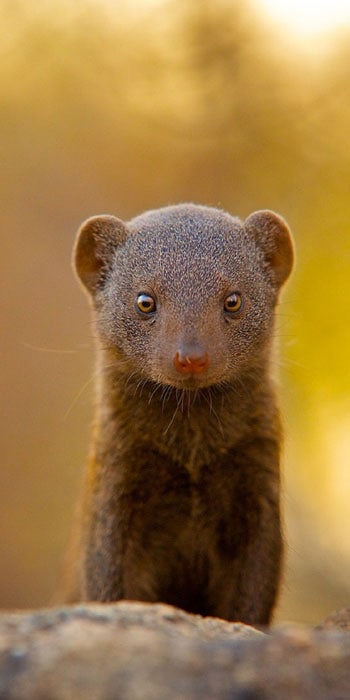