The Blue Wildebeest is a large bovine with dark vertical stripes running along its silver-grey coat. It has a characteristically long black mane running along its back and has a black beard stretching from its chin to its throat. Both the male and female Wildebeest sport a set of short curved horns. The males are much larger than the females, weighing in at about 250kg and stands at about 1.5m at shoulder width.

Blue Wildebeest breed only once a year. Each cow gives birth to a single calf and they are already developed enough to be able to run and move with the herd.

The wildebeest have developed an optimized survival strategy in which they migrate to where the food is more plentiful when food is scarce. The migration of Wildebeest is the largest number of animals on the move in recorded history, with migration herds averaging over 1.3 million individuals. Bulls are very territorial and maintain their territory well.

Blue Wildebeest are natives to the savannah and are plentiful in the Kruger National Park during Private Safaris as well asKruger Day Safaris . These amazing animals can also be found in a few countries north of South Africa. The numbers in the population are decreased due to fencing, which restricts the numbers of instinctive Migration.

The Blue Wildebeest has five known subspecies known in Africa; 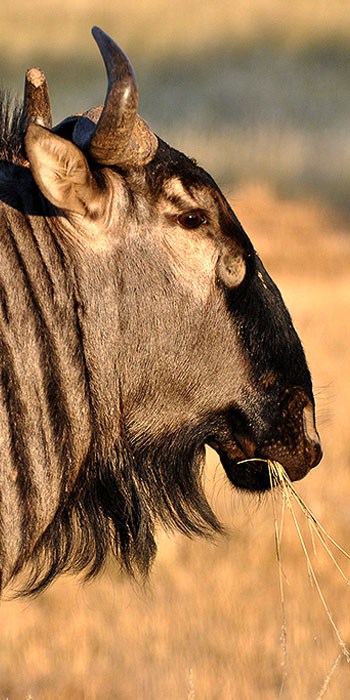