The Zebra, known for a few funny nicknames like the Pajama Horse, is an icon of the Kruger National Park and other outlying areas. The Burchell’s Zebra is a member of the Horse family, sharing similar traits such as the whip like tail, long skinny legs, long face and the mane on its neck. Where the Zebra and Domestic/Wild Horses differ is the Zebra is slightly smaller than horses and it has the iconic black and white stripes covering its entire body.

The Zebra does not have a Mating Season and is thus a non-Seasonal Breeder. The Foals can be born in any month although most foals are born in the summer months. The gestation period of a zebra ranges between 355 and 400 days where only one foal is born. The foal’s weight averages around 35kg’s. At the age of 11, the zebra foals are weaned.

Zebras usually travel in small herds, usually consisting of one Stallion, a Mare and their foals. The stallions who don’t breed travel together in Bachelor herds. The average age of a herd stallion is 12 years old. When there are watering holes in close proximity to grazing areas, multiple Family herds can be found grazing together. To help increase their safety, Zebra herds can usually be found with Wildebeest, baboons and antelope.

TheBurchell’s Zebra is an animal that can be seen through out South Africa, from the Kruger Park to farms and fields in the high and lowveld. There are two main species of Zebra in South Africa, The Cape Mountain Zebra and the Burchell’s Zebra, with the former found in The Southern and western cape of South Africa. These animals are very popular for people on a Kruger National Park Safari.

There used to be three different species of Zebra in South Africa. The Third Species went extinct in the 19th Century and was called the Quagga, an animal whose likeness resembled a combination of a horse and Zebra. 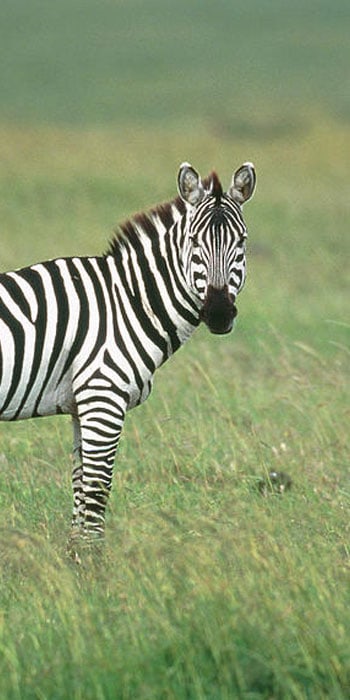