Black Rhinos have a bulky, heavy frame that weighs up to 1 200kg. Black rhinos have generally shorter horns than white rhinos, they have a pointed upper lip and trumpet shaped ears. The black rhino will usually be seen holding their small head high. The colour of the Black Rhino’s skin is partially determined by the type of soil it rolls in.

What most people don’t know is the Black Rhino doesn’t naturally eat grass. It is a browser that feeds on herbs, twigs, leaves and trees. Twigs and leaves are grabbed by the upper hook-like lip and pulled into the mouth where their molars masticate and shear the food.

Black Rhinos don’t have a mating season. Their gestation period lasts on average about 15 months after which a single calf is born with the rare occasion where twins are born. Female Black Rhinos will reproduce every 2 to 5 years.

Black Rhinos are very solitary animals that prefer living on its own. Rhino Bull territories are determined by the availability of food and water. Black Rhino bulls are very territorial and will kill straying bulls that enter their territory. When at full speed, Black Rhinos can run up to 55 km/h.

Black Rhinos are a critically endangered species whose population has taken a drastic decline since 1970. Because of poaching, Black Rhinos have been taken out of their natural habitats to safe and secure Rhino sanctuaries. Black Rhinos can still be found in the wild, in savannas and grassland areas. If you are lucky, you can encounter a Black Rhino on a Kruger Day safari. 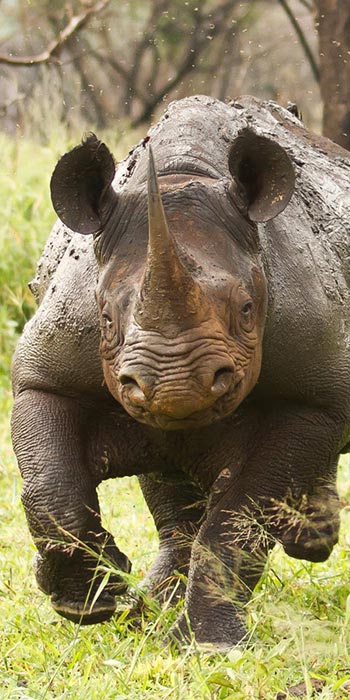