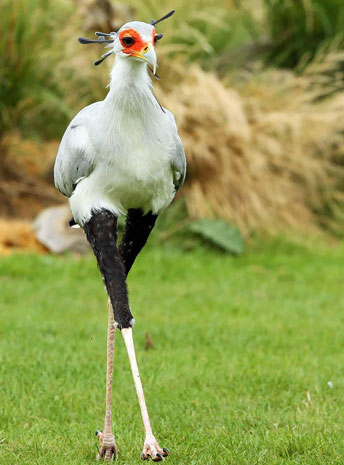 The Secretary Bird breeds for life and are actually faithful to a nest site. These birds make their nests in the low fork in an acacia tree. Their nests are made out of sticks that grow yearly just like those of an eagle. The eggs of a Secretary Bird are large and rough textured and take about 50 days to hatch. Both the male and female work together in building the nest and the eggs are laid between May and June.

The Secretary Bird is not a bird that takes to the skies a lot and prefers staying on the ground, only departing for the skies when forced to. The Bird will walk around on its long legs and relies on its speed to escape from its attackers.  These birds are adept in catching snakes and are often kept in cages to keep snakes away.

The bird will spread out its feathers like a big fan and use its powerful beak to catch its prey. Its legs are covered with thick scales that protects them from bites from snakes and other animals. Small animals are picked up and swallowed while some larger prey are bitten and mauled with their claws and then consumed.

The Secretary Bird can be found in the open areas of the savannah. They congregate in recently burnt  areas where mammals have perished in the blaze. They are wide spread throughout South Africa.