The Comoranth is a water faring bird that has a dark brown, almost black coat colour, that is waterproof. It has short stubby legs and has webbing between the toes. It has a white face and yellow beak that gradients towards white. The eyes of the Cormorant are a unique and beautiful blue colour. The chest feathers of the white breasted Cormorant are as the name suggests, white from its face to just above its breast. 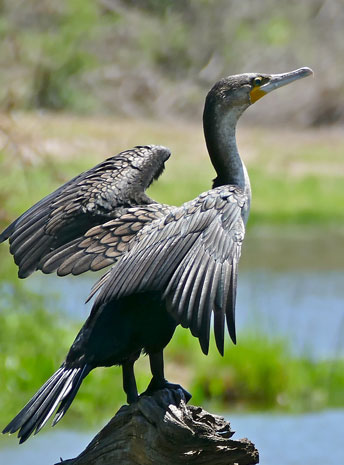 The White Breasted Cormorant is a water bird and feeds on crustaceans, arthropods, and fish. They sometimes will feed on insects when the opportunity arises.

The White chested Cormorant breed throughout the year, the breeding reaches a peak between August and January.  3 – 4 eggs are laid in a nest that are chalky white in colour, with green-blue tinge when freshly laid.

The White Breasted Cormorant is a silent bird on its own, but will produce loud grunts, squeals, hisses and growls, when they are near their nesting areas or in colonies.

The White Breasted Cormorant can be found in many locations near and around areas with lots of water both inland and coastal. They are commonly found in south Africa, Mozambique, Namibia, Zimbabwe and Botswana.