The name Pangolin comes from the Malay word “Pengguling” which means “one who rolls up”.

The Pangolin is one of the most sought-after sightings, not only amongst Kruger visitors but also amongst tourists visiting any area in South Africa where Pangolins are known to be. These scaly creatures are incredibly rare and exceptionally cute!

Pangolins, also known as Scaly Anteaters, are mammals which range in size from 30 cm to 100 cm and can weigh up to 18kg.  They prefer to live in savannah woodland, but can also be found in grasslands, sandveld or rocky slopes, which makes the Kruger the ideal place to see them. Pangolins do not live in desert or forest areas. These are nocturnal animals and the adults tend to be solitary creatures. In captivity, they have been known to live up to 20 years, but because of their shy nature, they are very difficult to study, and so it is unknown how long they live in the wild.

The Pangolin is the only known mammal to be covered in hard protective keratin scales with the exception of its belly and inner surfaces of its legs.

Pangolins have no teeth but a tongue almost as long as its body.  They are entirely insectivorous and use their long tongues to feed mainly on ants and termites.  Prey is located by smell, even should they be under the sand, and it uses its front paws to tunnel down and open up ant nests.  It has a rod-shaped tongue that is covered in sticky saliva and used as a tool to collect the prey out of their nests.  It can feed up to 90 times a night, and consume about 70 million ants a year.   Having no teeth they use sand ingested with each tongue full to assist to masticate the food in the muscular mouth.

For 1-2 days during March, Pangolins couple up in pairs and mate.  After 135 days the female gives birth to a single baby.  Baby Pangolins are suckled in a burrow and left there when the mother goes out to hunt.  Very often the young one will be moved after a month to a new burrow. When the young are old enough, the mother will let the young ride on their tail.  If the mother senses danger, she will curl up around her baby. She’ll also curl around her baby at night. Offspring usually stay with the mother for about two years. 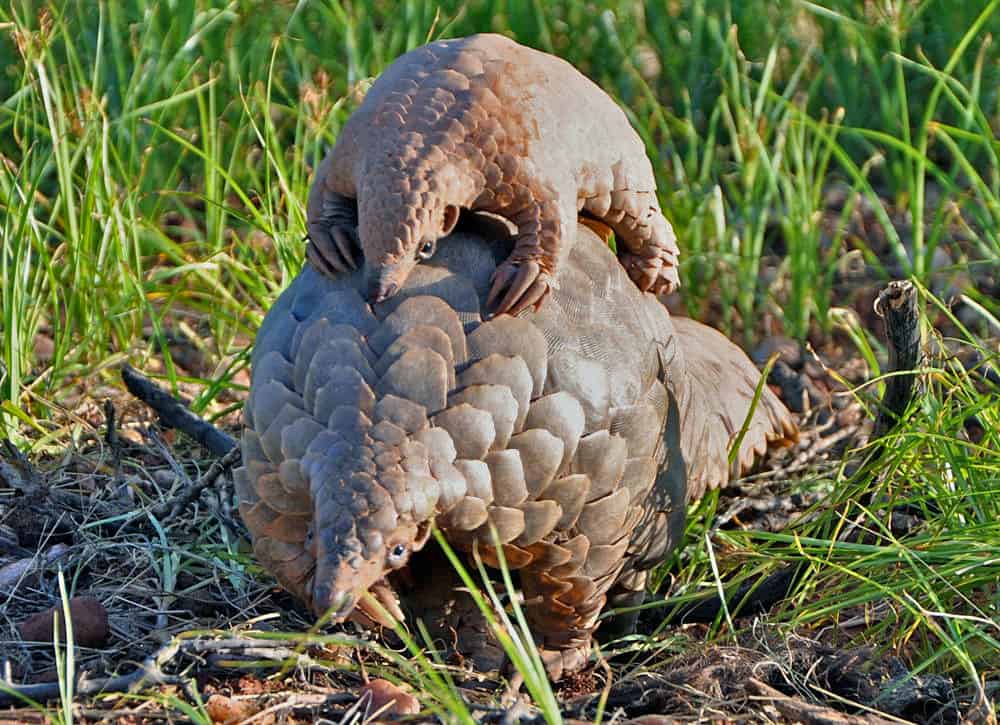 A Pangolin’s first line of defence is to roll up in a ball.  Similar to a skunk, Pangolins have scent glands and they spray would be enemies.  They are also known to lash out with their razor-sharp scales.  Pangolins can run at a speed of 5km per hour on all fours or stand up on their hind legs and use their tails as support.  Natural enemies of the pangolins are leopard and hyena, however, humans are their biggest enemy.

Pangolins are illegally hunted locally for the bushmeat trade and to make traditional medicine.  Thousands of Pangolins are illegally hunted every year for the international market. In China, Pangolin meat is considered a delicacy, while in parts of Asia and Vietnam the scales are in demand for medicinal purposes.  Pangolin scales are roasted and believed to cure cancer or stimulate breast milk.  Their skins are used to make leather boots.

Electric fences are also a major threat to Pangolins, annually killing at least one Pangolin for every 11km of fence.

While the chances are slim, but not impossible, when it comes to spotting a Pangolin during a day drive in the Kruger Park, anything can happen when you visit this part of the world. Booking a night drive might be the better option.