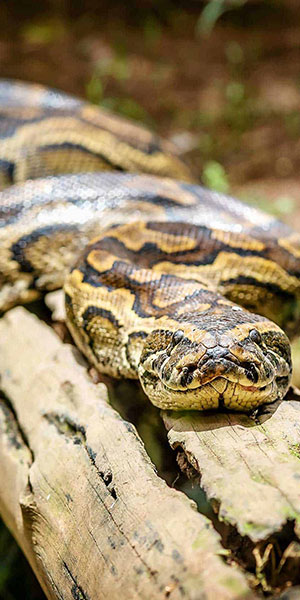 The African Rock Python is the largest snake in Africa. There is a large spearhead mark on the top of the head; dark and light stripes radiating from eye to mouth. The body, with dark-brown, black-edged bars and blotches on top, is grey-green/-brown.

The African Rock Python is present in sub-Saharan Africa across Central and West Africa, with the Southern African Rock Python found in the Lowveld from Kenya through South Africa, touching the south coast of Kwa-Zulu Natal, and spreading to Lobatse in Botswana and the Northern Cape along the Limpopo river.

The female lays 30-50 large eggs, which are almost spherical. To secure the larvae, the female wraps around her nest, but she does not incubate them by shivering. It takes 65 – 80 days for the young hatch.