The cheetah has the a much smaller body than a leopard and is characterized by a slender body, a rounded head and very long legs. It has small rounded ears compared to the Leopard. From its snout to its tail, the cheetah stretches 2 meters and weighs about 50kg on average. The Cheetah has low hind quarters and a concaved back. The Cheetah has a lightly coloured yellowish coat that is littered in black spots. Its tail has black rings that run along it towards the tip. Its tail is as long as half its body.

The Cheetah is a predator that hunts medium sized prey such as Steenbok and Duiker, Springbok and Gazelle, though there have been cases where groups of males have worked together to take down much larger prey like Wildebeest. Baboons, Bustards, Hares, ground dwelling birds and Porcupines also fall prey to the cheetah.

Cheetahs don’t have a fixed breeding season and rather give birth after a 3-month gestation period. On average, there will be 3 cubs in a litter, with some cases even having 6. The cubs stay with their mother for two years but unfortunately a majority of the cubs won’t make it to adulthood as they are constantly preyed upon by Lions, Hyenas, Leopards and Foxes. With the Cheetah being a frail and smaller cat compared to most other cats and predators, the mother will rather sacrifice her cubs or risk being killed. Luckily the survival rate for cheetahs in concealed and covered areas is much higher.

Cheetahs live in family groups that vary between 2 and 6, though some prefer to live in solitary. Cheetahs are primarily daytime hunters and will be active during the peaks of sunrise and sunset. Cheetahs will choose a resting place that is elevated and will rest under trees in the shade during the hot hours of the day. A surprising thing is a cheetah’s sound isn’t like a cat or any aggressive animal that growls, but it makes a bird-like chirp. They do occasionally hiss, growl and snarl like a domestic cat too. Cheetahs are known as the fastest land animals on earth, clocking in at 90 km/h at full sprint. Unfortunately, they are sprinters and not endurance runners.

The cheetah is a rare and very protected species and are only found in the Kalahari and remote areas like Mpumalanga and the Northern cape. Cheetahs were eliminated in KwaZulu Natal and have small numbers in Namibia.

The King Cheetah isn’t a separate species of Cheetah but rather a very rare occasion. The King Cheetah’s colouration differs greatly from the Cheetah as the spots of the King Cheetah are much larger and many of them are connected creating large splotches instead of individual dots. The King Cheetah can be seen in the Kruger park during Kruger Park Safaris and are a great sight to see. 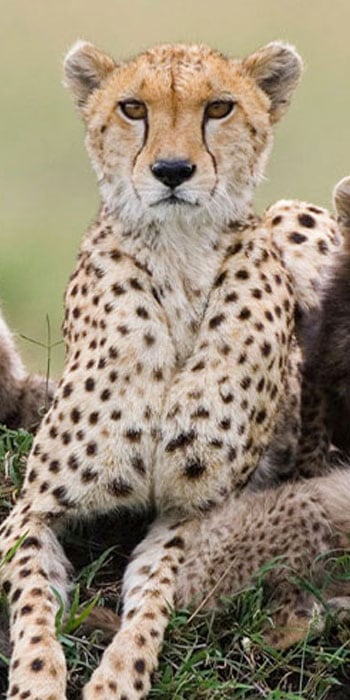