The Kruger National Park is a place of natural wonder and ancient history. The park’s creation and current state has a lot to do with the passion of the people who spent their lives working to build a place for the wildlife to thrive.

While travelling through the Kruger, you could pay your respects to some of these people, by visiting their graves.

In 1888 a young man named Leonard Henry Ledeboer came out from Holland.  He was known in the area as an elephant hunter.  In 1919 Ledeboer becomeone of the early rangers, and later he relieved “Ou Kat” Coetser at Satara. Anna C Ledeboer was Leonard H Ledeboer’ second wife.  Mrs Ledeboer died unexpectedly of either malaria or a heart attack and her grave can be seen at the end of the 3rd turn off on the S62. 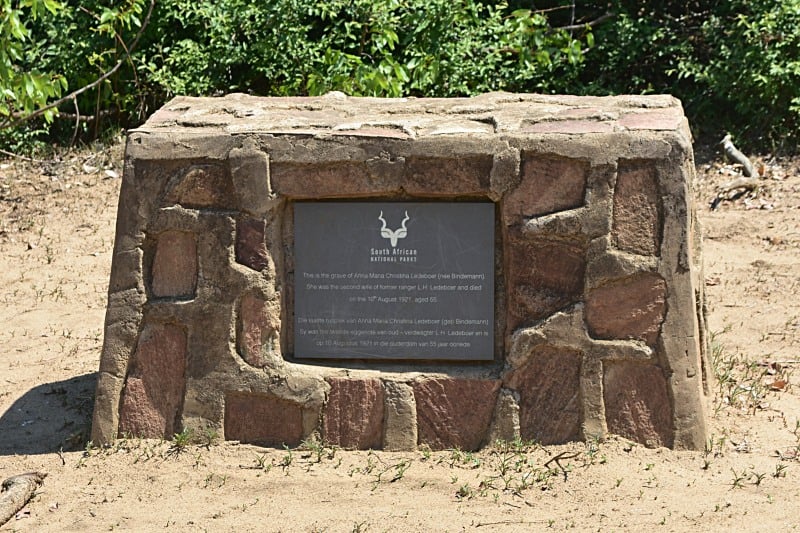 In 1920, William Lloyd was a ranger stationed at Satara.  Back in the day Satara was a very remote station that could only be reached by horse or foot.  Here Lloyd, his wife and three children lived a completely isolated life.  Although Mrs Lloyd managed to get a message to Stevenson-Hamilton about her husband being ill with pneumonia, by the time he got to them, Lloyd had passed away and his wife had already buried him under a tree close to their house.  William Lloyd’s grave can still be seen at Satara next to the road from the camp.

The oldest camp in the Kruger National Park is Pretoriuskop.  The camp was named after Willem Pretorius who was a voortrekker and had a stop-over point here.  The Pretoriuskop area is elevated and was therefore a safe spot from malaria and the tsetse fly.  In 1845, Willem Pretorius died here and was buried by Joao Albasini.  His grave can be seen after entering the Kruger National Park on the main Skukuza road (H1-1).

Originally from White River, Gert Stols was a blacksmith and hunter and his family were famous wagon makers and also hunters.  In August 1886, Gert Stols went hunting near Bukweneni River.  While here, he contracted malaria and subsequently died.  Later this area was named “Stols Nek” in his honour.

Many prospector’s in the area met the fate and were buried in Skukuza.  Many of these graves are from the gold rush days and unmarked.  Most of the graves here face east to west although some face north to south.  The latter are the graves of those executed for crimes.

Louis Trichardt and his group crossed the border of the present Kruger National Park on March 1838 at Tshokwane on route to Lourenco Marques.    They trekked through the area that was infested with malaria.  Louis Trichardt along with most of his followers died during this journey.  It is at Tshokwane that the memorial plaque can be seen.

Learn more about the park’s history, and all sorts of other things when you experience a Kruger Park safari.