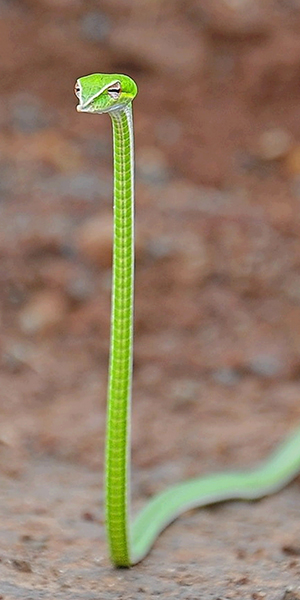 The Vine snake is a very long and thin snake that has rather large eyes, with keyhole shaped pupils, and a lance shaped head. The Vine Snake has scales that are feebly keeled in rows of 19 that end towards the middle of the body. The throat of the snake can inflate to increase its size and intimidate hostiles. Its scales are coloured to represent branches and twigs to help it disappear among the trees.

This snake has a varied diet that consists of lizards, other snakes and small birds.

The Vine snake lays 4 – 18 small eggs in the summer months. A single female can lay two clutches of eggs in a single season. The young slings will hatch between 60 – 90 days.

The Vine Snake can be found throughout Eastern and Southern Africa in locations with a lot of tree coverage.

This snake is equipped with a hemotoxic venom (This venom prevents blood clotting), there is no antivenom for the vine snake because bites do not happen frequently. If a bite happens it is usually a snake handler that has been bitten.