The Sanderling is a small bird with a primarily white body with black and grey feathers covering the top of its head, neck, wings and back. It has a long black beak and black legs and feet with three toes. 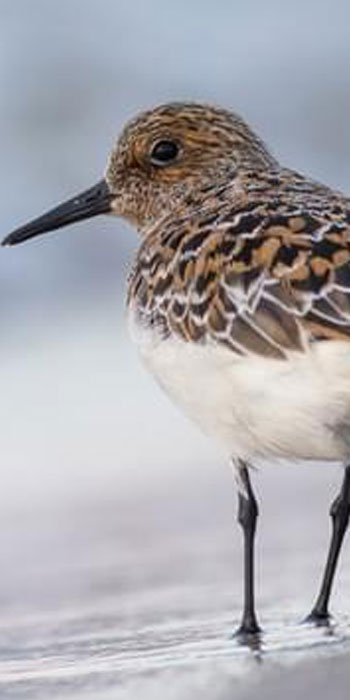 The Sanderling eats crabs and small invertebrates. They will also occasionally feed on small insects they can find on rocks, in sand and near water.

Sanderling males are quite territorial and aggressively defend their territories from other males. Sanderlings have been known to have more than one partner, forming either monogamous or polyandrous pairings.

Sanderlings can travel up to 10,000km from its breeding grounds to the various winter sites. Any Birds that must travel further than others also leave earlier but will mostly arrive later. Adults leave breeding grounds during July and early August while the juveniles leave late August, early September. The breeding behaviours of Sanderlings will differ depending on the area they are found in.

Many Sanderlings that live near beach areas, have a funny and unique behaviour as they run with the ebb and flow of the waves while they are feeding. Sanderlings can be very social animals and can be seen in large groups, socializing with each other and feeding in groups.